Something professional police officers fear, and guard against, is becoming badge heavy. A badge heavy officer is one that comes to believe he has ultimate power. Because he is a police officer, he must be obeyed without question, and the law, to say nothing of proper police procedure, applies not at all to him. He speaks, others jump. He acts, others bleed. Such a case recently occurred in Salt Lake City, as Fox News reports:

A Utah nurse screamed “help me” after a cop handcuffed her for refusing to draw blood on an unconscious patient July 26, police body camera footage showed.

The video showed University of Utah Hospital nurse Alex Wubbels, an Alpine skier who participated in the 1998 and 2002 Winter Olympic games, calmly explaining to Salt Lake Detective Jeff Payne that she could not draw blood from a patient who had been injured in a car accident, according to The Salt Lake Tribune.

Wubbels told Payne the patient was required to give consent for a blood sample or be under arrest. Otherwise, she said police needed a warrant. Payne threatened to imprison Wubbels if he was not given the blood sample, according to the video.

‘I either go away with blood in vials or body in tow,’ Payne is shown saying.

Here, Officer Payne has made another fundamental mistake: he’s backed himself into a corner, and can’t save face without making good on his unsupportable threat. In such a situation, no amount of common sense will prevail, even though Nurse Wubbels did her best to help Payne avoid making a fool of himself:

Wubbels being manhandled by Payne.

Wubbels, who was on the phone with her supervisor, explained the situation to the supervisor, who agreed with the nurse and reportedly told the cop, ‘sir, you’re making a huge mistake because you’re threatening a nurse.’

Wubbels yelled, ‘Help! Stop! I did nothing wrong!’ while being handcuffed.

Wubbels was absolutely right about that. But why was Payne so determined to get a blood sample? Reason.com explains:

In fact, the claim that this blood draw was part of an ‘investigation’ at all adds another layer of revulsion to Payne’s behavior. The unconscious man Payne wanted blood from was not suspected of any crime and had done nothing wrong. He was, in fact, a victim of a crime.

The patient, William Gray of Idaho, was driving a semi truck in Northern Utah when he was struck head-on by a man who veered into oncoming traffic on a highway in Wellsville on July 27. That driver, who died in the crash, was fleeing from the police in a high-speed chase. Utah Highway Patrol officers were responding to calls about an erratic driver, and the man, Marco Torres, 26, led police on a chase rather than get pulled over and detained.

So Gray’s terrible injuries were a consequence of a police chase that he had absolutely nothing to do with. He was in the wrong place at the wrong time. According to the coverage of the arrest, Payne said that he wanted to draw blood from Gray to check for drugs in order to “protect” him in some fashion, not to punish him, and that he was ordered to go collect his blood by police in Logan. It is not made clear in any coverage what exactly the police would protecting him from by drawing his blood without his consent while he was unconscious. Payne also said it was his watch commander, Lt. James Tracy, who told him to arrest Wubbels if she refused to draw blood.

In other words, Payne had no lawful, logical reason for his demands, even if a higher-ranking officer did direct him to arrest Wubbels. So what happened? Did Payne take Wubbels to jail? Back to Fox:

Wubbels was not charged and police have started an internal investigation. Payne remained on duty although he was suspended from blood-draw duties.

Christina Judd, a spokesperson for the Salt Lake City Police, has apologized to the hospital and said the department was alarmed by what they witnessed in the video.

Judd said the department was working to investigate what went wrong and is seeking to repair the ‘unfortunate rift’ it has caused.

‘University of Utah Health supports Nurse Wubbles and her decision to focus first and foremost on the care and well-being of her patient,’ said Suzanne Winchester, the hospital’s media relations manager. ‘She followed procedures and protocols in this matter and was acting in her patient’s best interest. We have worked with our law enforcement partners on this issue to ensure an appropriate process for moving forward.

Among the first things any patrol officer learns is the law and procedure relating to blood draws. They’re taught this in their basic law enforcement academy and in their local field training program. This is information they need in their daily jobs. Any officer with any experience has applied that knowledge many times.

This is clearly a case of contempt of cop. It’s a logical and inevitable result of being badge heavy. The officer issues an edict, some unfortunate person—in this case, a nurse—declines to do what he demands, and his ego cannot abide such resistance, thus his angry and excessive behavior toward Wubbels. 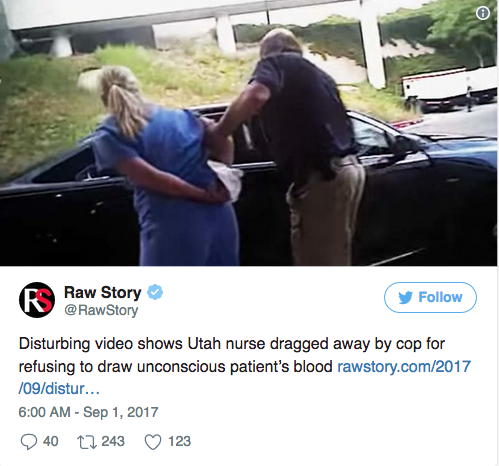 Several news accounts suggest Wubbels was not arrested and was not charged. Only part of this is accurate. She was not ultimately charged with a crime because she committed no crime. However, Wubbels was manhandled, handcuffed, and forced into a police vehicle, where, by all accounts, she was forced to sit, without air conditioning, for some 20 minutes.

Police officers may, under some narrowly defined circumstances, handcuff people, even confine them in a police car or elsewhere for a short time. However, this is legitimate only when officers have a clear and compelling safety reason for doing it. Even so, when there is no longer a safety issue, the people handcuffed or confined must be released. In this case, there was certainly no safety issue involved.

An arrest occurs, whether an officer says “you’re under arrest” or not, when a reasonable person believes they are not free to go. If you’ve ever received a traffic ticket, gentle readers, you have been arrested. While you were stopped, waiting for the ticket, you were not free to go. The officer, as a matter of policy and practicality, did not take you into physical custody, take you to jail, and force you to post a bond to be released, though he could have. For traffic violations and other minor offenses, that would take entirely too much time and effort, and it’s accordingly rare, but you were arrested nonetheless. You were not free to go, and if you tried, you would surely end up in jail.

Nurse Wubbels was not only manhandled and handcuffed, she was confined in a police car for a considerable period of time until wiser and more professional judgment was applied and she was released. Would a reasonable person so treated think they were free to go? Certainly not; Wubbels was falsely arrested.

So what? She wasn’t inconvenienced very much or for long. That’s not the issue. The power to arrest is a significant power, and is never to be taken lightly. False arrest is always a big deal. When it’s discovered, professional police officers undo the mistake as quickly as possible and apologize profusely and sincerely. The other, perhaps even larger issue is the relationship between the police and medical personnel. Police officers sometimes make mistakes, and as long as they’re not too serious—no one was injured or killed—they can usually recover from them.

Police officers and paramedics, EMTs, nurses and doctors work together every day. No competent police officer wants to have a bad relationship with people who might, at any moment, be responsible for trying to save their life. Officers also understand their priorities may not be the priorities of nurses and doctors at any given moment. With that in mind, they tread softly, deferring to medical personnel while carefully finding a way to do their jobs. It’s always better to be friendly and cooperative when possible. Usually, this balancing act works well, and everyone gets along, which is good because they all know each other’s reputations and behave accordingly. Cops and medics talk shop. By roughly handling Wubbels, Payne all but destroyed a relationship many years in the making. This, rather than the mistake over the false arrest, will likely be the determining factor for discipline, that and Payne’s rough and unnecessary manhandling of Wubbels.

Wubbels is reportedly still considering whether to file a lawsuit, which would surely be quickly settled out of court. It also appears Payne is in departmental, even criminal trouble, as local station KUTV reports: 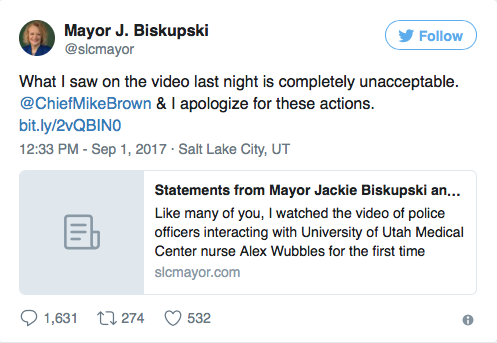 The Salt Lake County District Attorney’s Office and Unified Police have launched an independent criminal investigation of the arrest at the center of a now-viral video from the University of Utah ER. [skip]

‘I want to be very clear we take this very seriously,’ Brown said. we will have to let the process play out. I haven’t made any decisions I haven’t reviewed the whole thing yet. I want people to trust in the process.’ [skip]

‘In fairness to all those involved I have requested a criminal investigation into the incident so that the District Attorney’s office could screen the matter after gathering all the facts. Our office had not received any materials on the matter thus far and in the interest of justice and given the prima facie evidence a criminal investigation is warranted,’ [District Attorney Sim] Gill wrote.

A year ago, the Supreme Court ruled blood draws without permission require a search warrant, though breathalyzer tests don’t.   Reason.com has the details.

One can be certain of one thing: Payne will be facing departmental discipline, and possibly, criminal charges, and those decisions will be made quickly. This is not a difficult case. The facts are simple and there is little evidence to collect or process beyond an interview with Payne and the Lt. he claims told him to arrest Wubbels. If the LT. did in fact give him such stunningly bad advice, he is in real trouble too (a “second police officer” who remains unidentified has been placed on administrative duties with Payne), but ultimately, Payne has an obligation to refuse unlawful orders. 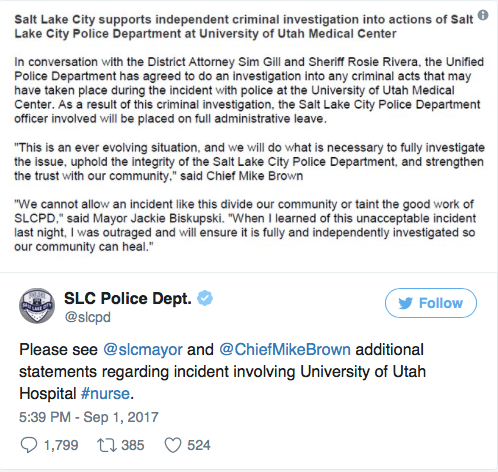 The speed with which this case will be decided stands in stark contrast to the Justine Damond case where the local prosecutor, with a case little more demanding, is claiming it will be necessary to take 4-6 months for a charging decision.

Should Payne be fired? That will depend in large part on his past history and the degree of damage to police/community relations his superiors believe he has caused in this incident. One thing is certain: he should never again have anything to do with medical personnel. Unfortunately, Payne’s actions will be seen as many as yet another indictment of America’s police officers at a time when they don’t need that kind of publicity.

As for Payne, there will be bloodletting, and he’s opened his own wound.

The Alex Wubbels Case Archive may be found here.