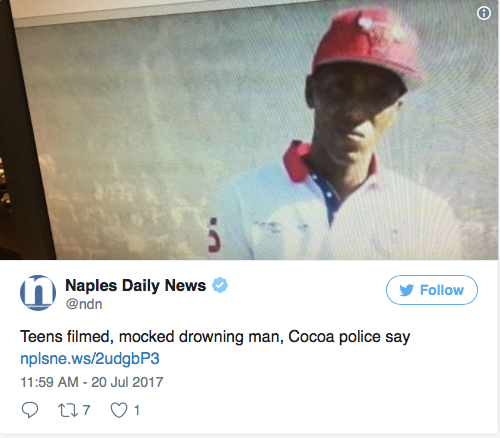 What is the nature of man? Is man inherently good or evil? Given the opportunity to do good, when no one else is around to take notice, how does man respond? Or does the answer depend on the situation? In this heartbreaking and rage provoking case, the answer seems clear. Florida Today reports:

Police and prosecutors say little can be done legally after the revelation that a group of teens filmed the dying moments of a 32-year-old disabled man last week, with the teens mocking, cursing and laughing while the man drowned in a fenced-off pond.

The Brevard County State Attorney’s Office released the video to FLORIDA TODAY and called the incident a ‘tragedy’ and said the teens’ lack of action had ‘no moral justification’ but added that the teens do not appear to have violated any laws.

Among the helpful things the “teens” yelled at the drowning man was:

Ain’t nobody gonna help you, bitch.

The minute-long video, which police called ‘extremely disturbing,’ found its way to social media over the weekend before ending up in the hands of detectives.

The clip depicts the unidentified teens — ages 14 to 16 — off-camera, laughing as the man screamed off in the distance for help before going under in the murky water just after noon July 9 off Plaza Parkway. There were no calls to 911 from the teens.

Instead, police later found the badly decomposed body of the man — identified as Jamel Dunn — July 12. Police said Dunn, who was heavily tattooed, was last seen wearing a black shirt emblazoned with the phrase ‘I’m Blessed,’ and a red hat that read ‘Only God can judge me,’ drowned.

Notice what’s missing? That’s right: the race of the “teens.” Whenever the media fails to identify the political party of a malefactor, one can be certain they’re Democrats. When the media fails to identify the race of brutal, witless thugs, one can be certain why. Can’t have the normals upset at minorities.  Take the link and view the video. If you are not moved to rage, and concern for western civilization, you’re probably not reading this scruffy little blog in the first place, and I have no doubt where you come down on the “nature of man” question. Of course, the “teens” couldn’t be satisfied with merely watching and taunting a dying man, they had to post their cruelty for all to see, because, man, taunting a drowning man is fuuuuuny!

Foul play was not suspected. His fiancée filed a missing person report after he failed to turn up at home in Cocoa. Then, after the body was found last Friday, a family friend saw the video on social media and turned it over to police. The cell phone video then gave detectives insight into what happened the day Dunn disappeared.

There will be no charges. One can’t be prosecuted for failing to help another, for demonstrating the worst impulses of the lowest dregs of humanity. But perhaps they later felt ashamed of their actions?

Police also added that there appeared to be little remorse from the teens. On the video, the teens refer to the possibility of an alligator being in the pond and can be heard shouting to Dunn as he splashed in the water.

‘Get out the water, you gonna die’ one teen shouted. Another yelled at Dunn, saying, ‘ain’t nobody fixing to help you, you dumb (expletive).’

Seconds later, Dunn could be heard yelling. Then his head disappeared beneath the water one last time.

‘Oh, he just died,’ another teen says before laughter ensues. The teens then left the park without telling authorities.

Imagine being the parent of one of these monsters. It’s possible, I suppose, that at least some parents involved did their best with these brutes, who just turned bad despite the best efforts of their parents. After all, people will often do things in gangs they’d never do alone. It’s also possible, as it is all too often, these were parents in name only, sperm and egg donors rather than moral leaders.

After the body was retrieved, detectives noted that one of the teens stared ahead during the questioning. Next to him, his mother broke down in tears, distraught at the situation he was involved in, Martinez said.

‘There was no remorse, only a smirk,’ said Martinez. There are worries for the boys’ safety as word of the case continues to go viral online.

Family members were shocked. Simone Scott, who identified herself as Dunn’s sister, took to social media to raise questions about how her brother was treated and the lack of charges in the case.

‘My brother is disabled and walks with a cane…please make it make sense to me,’ she said of his death. Another family friend said Dunn was the father of two young daughters and was known to be giving to others.

Wait. It gets worse:

The kids were at the park that day smoking marijuana and apparently saw him walk into the water. He walked in on his own. They were watching him,’ Martinez said.

Are these thugs true sociopaths, people with no concern for others, no conscience? Are these cruel dimwits members of the Future Felons of America, will they be a drain on decent humanity, or might they be able to reform sufficiently to rejoin the human race?

At the very least, their community should join together to let them know, for a very long time and in unmistakable terms, precisely what decent human beings think about them. They should be made to feel the pariahs they are, though there should be a light at the end of a long, hard tunnel.

The article suggests Dunn had an argument with his significant other and may have been considering suicide. If so, the cruelty and in action of the drugged thugs is no less reprehensible.

Forgiveness and salvation awaits all, here and in the hereafter. We don’t know all of the circumstances of these monsters, but we do know culture matters, and their behavior tells us, if we needed a reminder, what kind of culture to abhor.

These “teens” should fear the righteous disgust and disapproval of an outraged community, but such rage–and fear–is fleeting. Human memories are short. The memory of the Almighty is not. There is, always and ultimately, justice.

What is the nature of man?

13 thoughts on “Future Felons Of America”