As regular readers know, I’ve been cataloguing the many failings of government in Baltimore. Crime rates, particularly violent crime rates, are skyrocketing since Prosecutor Marilyn Mosby’s failed persecution of six police officers in the accidental death of local petty criminal and drug dealer Freddie Gray. While Gray has passed on to eternal social justice martyrdom, the city’s schools, particularly black inner city schools, are among the most obvious indicators of the utter failure of progressive, urban narratives. As always it is the poor, black residents of the inner city that suffer most at the hands of the black, progressive politicians they eternally elect. Come with me now, with the help of Fox Baltimore.com, to see what passes for education in a progressive worker’s paradise:

A Project Baltimore investigation has found five Baltimore City high schools and one middle school do not have a single student proficient in the state tested subjects of math and English.

Regular readers know I am less then enthusiastic about mandatory, high stakes tests. All too often they reveal nothing meaningful about individual student achievement, and reveal nothing with the expenditure of mountains of taxpayer dollars. I am completely unfamiliar with Maryland’s testing schemes, however, even with a flawed test, one would expect around 50% of kids taking the test to pass with at least a minimal score. My series on the fallacies of mandatory, high stakes tests may be found here.  That final article of the series has link to the earlier articles.

Why 50%? Do I have data? No. I’m stuck with decades of experience instead. It’s an educated guess. If a given school is properly teaching English and Math, the kids should pass at a 50% rate taking such a test cold, with no preparation. This assumes, of course, the test is not horribly flawed. Given long-term exposure to such tests, and the mandate to produce high passing rates or else, competent teachers are forced to spend 40% of more of a school year drilling for those tests, which virtually always produces much higher passing rates. For any school to utterly fail…let’s allow one exceptional student’s parent to give her opinion:

What could cause this? Progressivism. The biggest factor is likely inmates running the asylum. The first and most important job of any principal is establishing and maintaining an atmosphere conducive to learning. If kids have to worry about being robbed, raped, beaten or killed in class, it’s rather difficult to focus on studies. When teachers have obscenities screamed at them, when kids ignore or assault them, when adults abdicate all control and responsibility, what goes on within those buildings is certainly not school; it’s something else entirely.

Please keep in mind I have no direct knowledge of the situation in Baltimore Schools, but I know what works and what doesn’t work. As much as I hated the damned things, my colleagues and I were able to drill our kids into the high 90th percentiles in passing rates.

Another common problem in urban schools is teacher’s unions. It is virtually impossible to fire incompetent, even malicious, teachers. You’ve read the horror stories, some of them here at SMM. A student stuck in the class of an incompetent, lazy, unqualified, drug-using, or simply stupid teacher loses a year in that discipline. They never make the neural connections they need to progress. They lose much more than a year of specific knowledge, and some even regress. 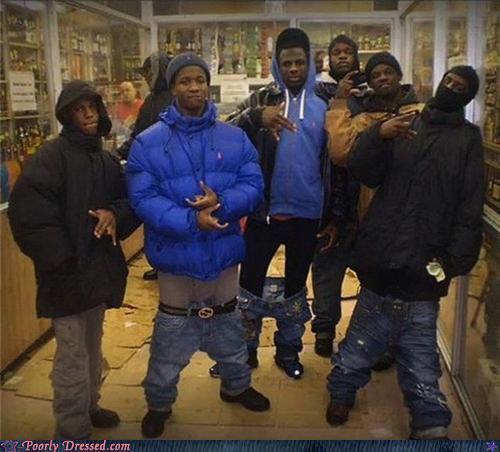 Culture also matters. In much of black culture, particularly urban culture, kids that do well in school, that want to learn, are relentlessly attacked for “acting white.” All too often they practice an ancient and venerable culture based on hoodies, sagging pants, backward ball caps, drug use, crime, misogyny–and worse. It’s a culture that has accomplished…it’s accomplished…well, nothing much, actually. Such kids not only aren’t readers–an enormous, even insurmountable handicap in scholarship and life–they never develop the neural connections for abstract thinking, which is, of course, absolutely necessary for math. They reach the age of 17 or 18, where most kids begin to develop the ability for abstract thinking, with brains still stuck at 8 or 9, and no longer able to progress. They missed that neural connection bus long ago.

Imagine these kids being admitted to college–and many are. As long as someone is paying with checks that cash–government or parents–most colleges will accept them. Is it any wonder so many kids drop out of college without a degree and with massive debt and no skills with which to pay it off? Admitting such kids to college isn’t social justice, it’s cruelty.

Living in the inner city is also a disaster for kids that want to learn:

Navon Warren grew up in West Baltimore. He was three months old when his father was shot to death. Before his 18th birthday, he would lose two uncles and a classmate, all gunned down on the streets of Baltimore.

‘I’ve lost a lot of people, so I’m used to it. It hurts,’ Warren said. ‘I just chose not to show it. I just keep it in. You just have to live on and keep going on every day. You have to do it somehow.

Warren’s way out is, improbably, swimming. He’s an excellent, award-winning swimmer who placed fourth in the Junior Olympics in the 50 and 100 meter freestyle events. He has a swimming scholarship at Bethany College. He’s one of the very few from his high school that will not only graduate, but will go to college.

That’s a happy ending, or at the least, a wonderful opportunity for Warren, but is there any hope for Baltimore and its schools? Tragically, it’s unlikely.

Once political correctness forces schools to accept, even abet, rude, stupid, even criminal student behavior, there goes the ball game. Little or no learning will occur. It can’t occur. Once race is allowed to drive policy, any race, that’s the end of learning. Once incompetent teachers understand they can’t be fired regardless of what they do, the kids are doomed. And once social justice dictates the curriculum and discipline policies, the schools become little examples of the worst neighborhoods in any decrepit, violent inner city.

The kids in these schools are no less capable of learning–or when they were younger they weren’t–but are very much the victims of people like Marilyn Mosby, people who pretend to care about individuals, but see themselves as elite, special, far, far above and beyond the man and woman on the street.

Perhaps the most important lesson to learn here is that government, even conservative government, has no conscience. It does not care for any individual. It cannot care. It cares only about policy, which it firmly believes will make everyone’s life better. Usually, that’s not remotely true. Just ask the kids of those Baltimore schools, or their parents, if anyone can find them.

PS: You might find this article useful as well.