Remember the National Association For The Advancement Of Colored People? At one time, the organization actually did some good, serving as a part of the Civil Rights Movement that made necessary change. There can be no doubt the organization has long had communist connections, and has supported affirmative action, reparations, wealth redistribution and other arguably destructive progressive policies. It is a progressive advocacy organization through and through. But arguably, it made some positive accomplishments. Now, after the Age of Obama, it has overtly joined The Resistance, as The NY Times reports:

The national board of the N.A.A.C.P. voted Friday to dismiss the organization’s president, Cornell William Brooks, after only three years, pledging a “systemwide refresh” at the nation’s largest and most storied civil rights group in order to confront President Trump more vigorously.

Mr. Brooks, who said in an interview that he was ‘baffled’ and saddened by the decision, will leave the organization at the end of June when his contract expires. The group will search for a new leader while Leon W. Russell, the chairman of the board, and Derrick Johnson, the vice chairman, head up day-to-day operations. 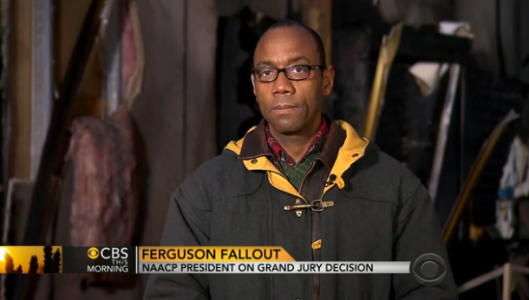 Brooks, doing what activists do…

Who is Cornell William Brooks, and is this change advantageous for America? In 2014, when he took over the N.A.A.C.P., Afram News.com introduced him:

Brooks, a longtime lawyer and human rights activist, serves currently as the President and CEO of the New Jersey Institute for Social Justice based in Newark. A fourth-generation ordained minister, Brooks has worked to pass legislation enabling previously incarcerated men and women to rebuild their lives as productive and responsible citizens, called a model for the nation by the New York Times. He successfully pushed for state legislation to reduce the effects of widespread foreclosures. Mr. Brooks has worked to develop social impact investing tools to employ more people in higher wage work.

Translation: Brooks is a social justice warrior, working not for equal justice under the law, but legal segregation where some animals are more equal than others. He has worked to enable black criminals and to help maintain a system where people unable to pay their mortgages are given taxpayer subsidized mortgages anyway. He also advocated forcing corporations and businesses to employ the unqualified and undeserving.

The sudden change at the top of the N.A.A.C.P. shows how the energy of liberal activists in the era of President Trump is forcing upheaval even in institutions like a century-old civil rights stalwart. Mr. Brooks was hardly reserved in his own activism. He was arrested in January for leading a sit-in at the Alabama office of Senator Jeff Sessions, trying to block his confirmation as attorney general.

But the board of the N.A.A.C.P. wants a new face of the organization. Mr. Russell and Mr. Johnson said the group needed to more effectively push back against Mr. Trump’s stances on issues like voting rights laws, public education, environmental policy and the criminal justice system. The group, which has been eclipsed in many ways by the more youthful Black Lives Matter movement and the broader opposition to Mr. Trump, is embarking on a listening tour of cities across the nation to get ideas about how it can remain relevant.

Ah. Relevance. For the New, more relevant NAACP, Brooks is obviously not nearly radical, not nearly progressive enough. In recent years, Jesse Jackson, Al Sharpton and other race hustlers have found their influence, and with it, their ability to shakedown corporations and governments, rapidly diminishing. So it has been with the NAACP. Rational, introspective people might think this trend due to the fact that the NAACP has drifted father and farther away from its rooting in genuine civil rights and seeking actual equality under the rule of law. However, it’s obvious rational people no longer run the NAACP. Now, as with all the resistance, they’re driven by hatred, and an all-consuming lust for power.

And what are the policies of Mr. Trump–in general–against which the new NAACP will “push back?” He wishes to enforce the law, equally, for everyone. People lawfully prohibited from voting shouldn’t vote. He actually wants to help inner city schools in meaningful and productive ways. He opposes throwing away billions on wealth distribution schemes that will do nothing to improve the environment, and he actually thinks we ought to punish criminals, particularly the kinds of criminals that prey on the very people the NAACP claims to represent and champion.

And what does the future hold for the NAACP?

But a younger generation of activists, while not criticizing Mr. Brooks, said there needed to be changes.

‘I don’t think the N.A.A.C.P. is ready for this moment because they have been too risk-averse to engage,’ said Symone D. Sanders, the former national press secretary for Bernie Sanders’s presidential campaign, who is black. ‘If folks aren’t ready to shut it down, to challenge this White House, to challenge Congress, to do more than just march, to do some real direct action, then they will not survive in this moment.

Translation: the NAACP must become a better organized and wealthier BLM, with all it’s race baiting, racism, crime, violence and hatred. No more logical persuasion. No more moral high ground–blood, and plenty of it. And, of course, a stridently progressive posture:

Mr. Russell said he was also worried about Mr. Trump’s executive order to revive the coal industry and nullify President Barack Obama’s work to combat climate change, as well as efforts by Betsy DeVos, the education secretary, to push for more school choice programs while cutting resources from public schools. The president’s budget, to be released next week, is expected to cut hundreds of millions of dollars from school-based mental health programs, advanced coursework and other services, and to plow much of the savings into a $400 million program to fund vouchers for private and religious schools, and to expand public charter schools.

In other words, more of the same failed progressive polices, segregationist rhetoric, and keeping the racist pot stirred:

Mr. Russell said the group planned to train members on how to disseminate information quickly to counter the White House, how to fight legal battles locally and how to move beyond protesting. Local chapters will also be getting more resources from the national organization to help bolster activism in both urban and rural areas.

Racist advocacy against our representative republic, lawfare, and racist violence on a national scale–that’s what America needs. After all, such things have worked so well in places like Detroit, Washington DC and Baltimore. The black residents of such urban hell holes need more, much more. It now appears whatever good the NAACP has ever done will be wiped entirely away, just one more benefit of joining The Resistance.

6 thoughts on “The NAACP: Joining The Resistance”