‘It is an honour that I dream not of.’

In that scene, Juliet diplomatically explains she is not thinking of marriage. In my case, I did not dream of going home–musically–yet I did.   All too often in life, we can’t go home. We can’t relive past experiences, and parts of our lives relived through memory are seldom as vibrant and blessed as they were when we lived them. But there are exceptions, rare and wonderful as they are…

The story begins 31 years ago in Gillette, WY, a rough coal and oil western boom town. Even Playboy Magazine did a story on Gillette–no “Girls of Gillette” layout guys, sorry; there were damned few women back then, and I got the best one–and concluded as crude and relatively uncivilized as Gillette was, people tended to get what they wanted out of it. I was a police officer there for eight years, returned to college to take an English and music degree, and with a wonderful and steady accompanist–Diana Rutz–founded the Gillette Chamber Singers, an auditioned adult chorus of 16-20 voices. She deserves equal blame–and praise. That’s a very young me, with a great deal more hair, on the upper left. 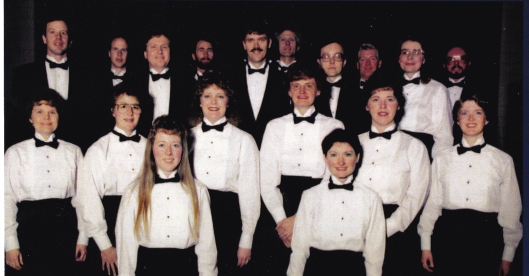 We were, culturally, a voice in the wilderness. The Chamber Singers were one of those odd groups one rarely sees. Great singers, to be sure, but genuinely good, loving and decent people, people who cared not only about the music, but each other. I was fortunate to be their director for the first four years, but as Harry Chapin wrote in Mister Tanner:

But music was his life, it was not his livelihood,

he did not know how well he sang, it just made him whole.

The music made by the Chamber Singers made me feel so happy, and so good, but it was the people made me whole. Career choices led me out of state, and for the most part, out of their lives, and I was forced to put the Chamber Singers in a compartment in the back of my mind, thinking that extraordinary chapter of my life forever closed.

Because my sister-in-law still lives in Gillette, and my sister lives in nearby Rapid City, I often visited, and sometimes saw old friends, like Norm and Vicki, so the Chamber Singers were never entirely wiped from the slate, still, those days remained a fond memory, displaced by my current musical pursuits, which are certainly satisfying, and on the same level as the music we performed those many years ago.

Imagine my surprise, gentle readers, when Vicki from the Chamber Singers reached out of the past and told me of the 30th anniversary reunion concert. She asked, rather tentatively, if I would be willing to return and direct, with the other two men that have held that podium over the years. Juliet’s line flashed through my mind. It was not something I had ever considered, ever thought possible. By then, Mrs. Manor and I had decided to retire in Gillette when our teaching days are done in the near future, and I hoped I might, once again, sing with the Chamber Singers–if they have room for a well-used, high-mileage tenor, but to stand before them again? An honour I dreamt not of. Would I be willing?!

After much cross-country planning and organization and an 18-hour drive, I walked into the church that would be our venue for some 75 singers from all over the nation–unfortunately some could not make it–and was smothered in hugs from the Board: Vicki, Kenda, Karen, and more and more of my friends and colleagues that have preserved and strengthened the Singers for three decades. It was honest, heartfelt, overwhelming, and deeply moving.

When we move on from things, from people, in our lives we wish them well, hope they’ll abide, but understand our ability to influence their lives, their endeavors, is past. For the most part, that’s true; it’s necessary. Living in the moment precludes living in the past. 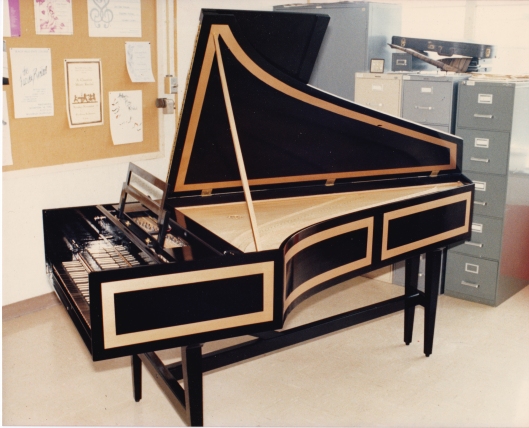 In college, I built a double manual harpsichord, even got college credit for it. It remains with my alma mater, Black Hills State University, to this day, and will surely outlive me–it’s a sturdy instrument–by centuries. We used it for two separate Chamber Singers performances. Even if no one knows who the “McDaniel” on the nameboard is, the music the instrument will produce will sing with a bit of me, a bit of the love I lavished on it, a modicum of immortality, as best we can experience it in this fallen existence.

But surely a human instrument made of so many parts could not survive for long? Flesh endureth not. I didn’t flatter myself to think myself irreplaceable. As Charles DeGaulle said, “the graveyards are full of indispensable men.” But to move on with my life, I had to let go my personal connection. Over the years, Norm and Vicki told me of the Chamber Singer’s continuance and accomplishments, and I was gratified, but saddened that I was no longer a part. I even heard from Diana and several of the others. But what, at the end of an 18-hour drive, would I find? What had the Gillette Chamber Singers become?

I need not have wondered. When I left all those years ago, I left behind extraordinary people, people talented beyond music–I’m speaking of you, Chris, but not only you–people alive and vibrant, and dedicated to creating beauty, making their community better than it was, and above all, dedicated to each other. They were just, by fortuitous circumstance or design, the right people. They carried the torch and made it burn brighter than I could have imagined. Over the years, they deepened the reputation we built in the early days, and made the Chamber Singers a regional artistic force, one of the finest choirs in America.

The two directors, Jerry Winter, the current director Pat Patton, and me, programmed six works each from our respective tenures. Directors are often ego-driven, jealous of their time and reputations. Not Jerry and Pat, who were as generous with their scarce rehearsal time as with their praise. I learned much from them.  As we did those works, I could see the memories dance in the eyes of the original singers. Only a single song required accompaniment–John Rutter’s For the Beauty of the Earth–and as Diana played the flowing accompaniment, we were transported back to those blessed early days, and for a few minutes, we were young again.

Music has that power, and that glory.

Few other choirs could have produced such an accomplished and passionate performance with so little rehearsal time, but we did, and for three days, days I never dreamed possible, I was taken back into the fold, a part of them again. We ate together, and enjoyed a reception after our performances, telling stories, laughing and reliving our lives, and learning just how small the world really is. Pat spoke of making some of his best friends on Earth in the choir, and I shared my intention to retire to Gillette, and perhaps, return to sing. During our final rehearsal, he announced my intention and welcomed me. He didn’t have to do that, but he did. Such is Pat; a new friend who found me. The gratitude, both personal and public afforded me for starting the Chamber Singers washed over me, continually, like a mountain stream, invigorating but humbling. I could not have been more warmly welcomed.

So maybe, just maybe, we can go home. Maybe the glories and warmth of days gone by can be experienced again, and perhaps, be even more real and blessed than the misty veil of memory can reveal. Just 18 hours away…

And I have a feeling

where the roads come together,

Mmmm, up the way.

May you, Chamber Singers and gentle readers all, be so blessed.