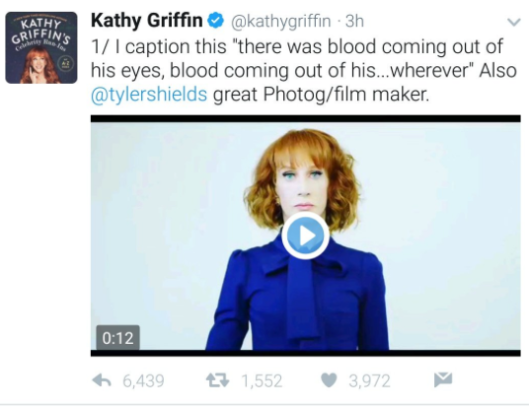 Deference: noun. Recognition of and appreciation for the position or authority of another.

Respect: noun. Recognition of and appreciation for the character or qualities of another.

Comedian Kathy Griffin’s recent miscalculation suggests the old maxim that there is no such thing as bad publicity—even bad publicity is good publicity—may have the occasional exception. First, however, let’s clear up some misconceptions.

Some argue Griffin erred in failing to properly respect the Office of the President. Not so. She failed to properly defer to the office, to the man holding that office. It is deference the Marines posted to the White House gave Barack Obama. Few respected him. Deference is given because of one’s position, and adhere as long as one holds that position. Respect is transitory. It is earned—or lost–every day. While Griffin certainly failed to give Mr. Trump the deference due him, that’s not the primary issue.

Double standard? Of course. Without double standards the left—the media, of course–would have no standards at all. The outcry had anyone produced a similar photo of any Democrat politician’s severed and bloody head—do I need to mention Barack Obama?—would be reverberating years, even decades later. And while some leftists have admitted Griffin went over the line, most of them qualified their milquetoastian criticism by pointing out Republicans are worse and Griffin was somehow justified because Trump.

The obvious question is who—apart from the subhuman, Islamic barbarians of ISIS and their sympathizers, would think of doing such a thing? Was this nothing more than a desperate publicity stunt? Was it an attempt to call attention to a “D” list comedian in the hope of making it to the “C” list? Keep in mind, gentle readers, Griffin was not alone in producing her masterpiece. It required a photographer, likely a publicist, makeup artist, and a variety of other hangers on, and all had to essentially say: “yes! Holding up the decapitated and blood drenched head of the President would be a really good career move! Let’s go for it!” This, in lieu of every other possible publicity ploy available.

One way to differentiate between the Left and Right is Leftists bloviate about the sanctity of free speech, but don’t practice it. They wish to shut down all speech with which they disagree, and are becoming increasingly violent about it. Their current “reasoning”—I use the word only because it is generally understood, not because they practice reason—is that “hate speech,” which is any speech with which they disagree, is violence in and of itself, therefore they are justified in preventing its very utterance, and in using violence to prevent it. This, they claim is necessary because hate speech/violence/is not free speech, causes them to feel unsafe, causes triggering, microaggressions, white privilege, etc. and is therefore not protected by the First Amendment.

The right actually believes in free speech. The antidote to bad speech is good speech. The free exchange of ideas is essential, therefore, one does not see conservatives protesting speakers, attacking them, or committing various other kinds of violence to prevent their ideas from being heard. Nor, in the case of Kathy Griffin, are conservatives demanding she be fired, demanding her performances be boycotted, or otherwise seeking to harm her. Nor are they claiming her depraved display is somehow connected with Hitler, genocide, racism, or any other current Leftist bugaboo. The actions of CNN and other sponsors of Griffin are quite separate from any conservative pressure.

This does not of course prevent the inevitable comparison of Griffin’s expression with that of Islamist barbarians who delightedly display the severed and blood drenched heads of their victims. Correlation is never causation. No one is suggesting Griffin is an Islamist, or a murderer. No one is suggesting Griffin’s example will lead Islamists to decapitate others. They need no urging to commit horrific atrocities. The Secret Service will likely have words with Griffin, and conclude she is no danger to the President.

I have seen perhaps two of Griffin’s comedy performances. I found her reasonably funny, but would never think to compare her to innovators like Steve Martin, Richard Pryor, Jay Leno and many others. We need not attack Griffin’s talent or lack thereof as one might prefer, nor do we need to attack her physical characteristics (did you know, according to CNN, Mr. Trump is putting on weight! CNN said it so it must be true!). It is enough to say that anyone so much as thinking of doing what Griffin has done willingly puts themselves outside the boundaries of civilized discourse, and beneath the notice of decent men and women. 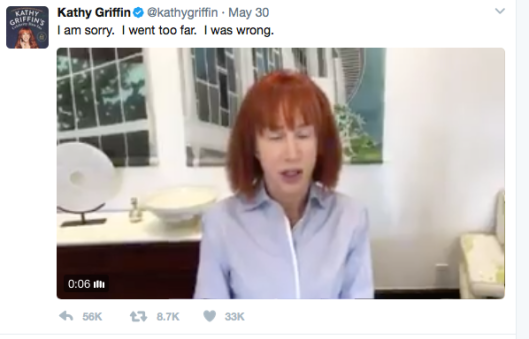 Griffin has issued an apology. It is up to you, gentle readers, to decide whether her apology is an expression of genuine remorse and contrition, or merely a cynical attempt to salvage whatever career she was pursuing when she thought displaying a simulation of the blood drenched, decapitated head of the President of the United States was a good idea. Is she sorry only that many of her—as a presumed Leftist—assumptions blew up in her face rather than securing the praise and progressive street cred she apparently sought and believed would be hers?

In a perverse way, Griffin succeeded. Virtually no one will ever again be able to hear her name without seeing this image. Some on the Left will think her a bold and valued social justice warrior of The Resistance. Most will be sickened. Thank God we are still, mostly, capable of feeling that kind of revulsion when exposed to that kind of depravity.