Back on July 24, 2016, I wrote Wheeling But Not Dealing, a sad epistle about my less than satisfactory dealings with Aerospoke, until the last few years, the premier manufacturer of carbon fiber bicycle wheels.   I began thus:

I like Aerospoke wheels. I really like them. In fact, I like them so much I bought seven over the years, six in the last five years alone. And I tried to buy four more. I really, really tried, but Aerospoke did its best to keep me from buying those wheels, and finally, they succeeded. I gave up.

I gave up because Aerospoke was so unprofessional, so irresponsible, I counted myself fortunate to get one more wheel out of them, and gave up entirely on the additional four wheels they promised. After ordering—and paying—for those wheels, months passed. Phone class went unanswered. Answering machines told me they were full and not accepting any addiional calls. I was able, in months of trying, to actually speak with one or two people—mostly “Larry,” who told me Aerospoke had experienced a fire, but they were working hard to fill my order. I doubted the fire story, but because I wanted the wheels, played along. So I kept trying to contact them. Their “contact” form told me” “Oops! That page can’t be found.” Their website disappeared several times, and returned, but I was still unable to get in touch with anyone.

In short, they were giving all the signs of a firm going out of business, or already out of business. Finally, I contacted my bank, and because I was smart enough to use a credit card for the purchase, was able to quickly claw it back.  I didn’t get the wheels, but at least I didn’t lose any money (we always pay off our credit card bill before interest accrues).

During the last year, Aerospoke produced a new website announcing they were back. Just to follow up on my original article, I e-mailed several times, asking if they were actually back in business, asking them to get in touch, and telling them I’d like to be able to recommend them again, but sadly, no answer. Now, going on a year later, I tried again. At aerospoke.com, I found this: 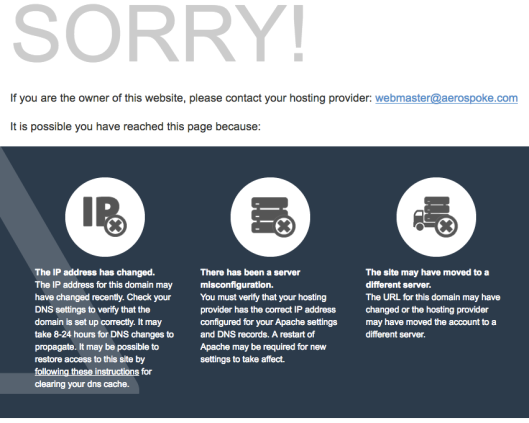 At aerospoke.co, I found this lovely and serene blank gray page:

A few days later, I found this, which is a repeat from about a year ago: 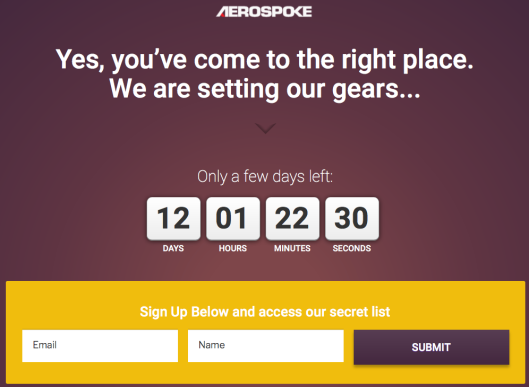 So it appears when Mrs. Manor and I bought our trikes, we obtained two of the very last Aerospoke wheels that may ever be produced. However, all may not be lost. There is a relatively new company—Encore Wheels—stepping into the breach. The good news is the folks involved appear to have worked at Aerospoke for some time, but left for what might be obvious reasons. In other words, they have considerable experience, and judging by their promotional materials, their wheels appear to be first rate. Also interesting is their apparent dedication to real customer and dealer service, which would seem to indicate they do have intimate experience with Aerospoke, whose reputation for both has been less than sterling. From Encore:

What sets us apart:

-Unmatched experience. Our team has more experience building this type of wheel than anybody in the world- PERIOD. Over half of our team are also cyclists and that is where you will find our roots.

-Designed and built in our state-of-the-art facility here in the United States using the most advanced software and tooling available. We have the capabilities in house that nobody does- starting with our mold-building process. Nobody has the manufacturing know-how and assets that we do under one roof.

– Dramatic increases in lateral stiffness achieved by investing countless design hours and computer analysis. How big does the spoke have to be and what should be the wall thickness? These and countless other questions were answered, not guessed at, before the manufacturing process started and confirmed upon completion.

-New features… new design… new technology.  Purpose built rims that are mechanically fastened AND bonded to the carbon wheel body.  We have partnered with our friends at Velocity, the premier American rim extruder, to extrude and roll our aluminum hoops taking advantage of their wealth of experience. Rim width is 23mm to accommodate a wide variety of tires.

The design and shape of our carbon spokes provide a much needed increase in lateral stiffness over the competition, achieving almost tube-like strength properties, while still having a much better aero shape.

Our newly designed hub locking system incorporates a precision machined locking shape to interface with the carbon wheel body. This system provides an optimum dispersion of the sheer forces between hub and wheel and the machined features of the hub add to the strength in critical areas that are subject to stresses from the drive mechanisms.  Speaking of which, the drive mechanism of our cassette hub is a newly-developed system that kills the competition. It is smooth, low-maintenance and easily accessible.

-Commitment. We are committed to the cycling industry and to the customers we have come to know over the years and we look forward to making new friends and rekindling old friendships.   It is our sincere belief that we have a superior product in every way and it is our goal to provide unmatched customer service.

The bad news is:

-Rear fixed gear wheel featuring a hub that can be used for single fixed, fixed/fixed, or fixed/freewheel.

In other words, Encore currently makes only 700c wheels. No 20”, 24” or 26” wheels, which are the sizes necessary for mountain bikes, two-wheeled recumbents, and recumbent trikes of all descriptions. Why not? The expense of design and tooling for any new wheel is prohibitive for a start up company only about a year old.

I did ask Encore to call me back, and not only did they do it promptly, I was impressed by their knowledge and determination to build a superior product—which is, by the way, cheaper than Aerospoke was producing—but particularly by their obvious dedication to running a business in a businesslike manner, which means first rate customer and dealer relations.

****Trade-in Promotion**** We have had a lot of calls lately about parts and support for Aerospoke wheels. While we are not affiliated with them and we are not sure of the current status of that company, we feel the pain that customers feel when trying to get parts, warranty, or just any type of customer service in general. As such, we would like to offer a trade-in deal… Trade in your Aerospoke wheel in any condition, and we will give you a $125 discount per wheel toward new Encore wheels. This is an unheard of deal ! Call or email us for details. Retail customers only.

As Encore says, that’s unheard of.

So gentle readers, spread the word of the new good guys in town. If you have need of 700c wheels, they’re the hot ticket. And perhaps if we can help with the volume of their business, one day before too long, they’ll have those lovely 20”, 24” and 26” wheels available as well.

1 thought on “Wheeling But Not Dealing 2”