As regular readers know, climate hysteric Michael Mann is among the leaders of a discredited science that regularly engage in serial predictions of the doom of mankind. So often has our collective doom been predicted, it’s hard to tell if the Earth still exists and if any of us are alive. The invaluable Watts Up With That, provides Mann’s latest prediction of the climate apocalypse:

Oh dear. So we have only three years to do what Mann wants and to give billions to him and those with similar views. And let’s not forget that Donald Trump intends to destroy the world:

But wait a minute: isn’t the world already dead? James Hansen of NASA, in 2009, predicted doom in 2013, as the Guardian tells us:

Barack Obama has only four years to save the world. That is the stark assessment of Nasa scientist and leading climate expert Jim Hansen who last week warned only urgent action by the new president could halt the devastating climate change that now threatens Earth. Crucially, that action will have to be taken within Obama’s first administration, he added.

However, Hansen said feedbacks in the climate system are already accelerating ice melt and are threatening to lead to the collapse of ice sheets. Sea-level rises will therefore be far greater – a claim backed last week by a group of British, Danish and Finnish scientists who said studies of past variations in climate indicate that a far more likely figure for sea-level rise will be about 1.4 metres, enough to cause devastating flooding of many of the world’s major cities and of low-lying areas of Holland, Bangladesh and other nations.

Don’t all those major cities and other places, which are not, as far as they can tell, underwater as a result of devastating flooding, know they’re actually underwater? After all, a NASA scientist said so back in 2009. On the other hand, during the Obama years, NASA didn’t really do much science, being focused on making Muslims feel good about the scientific contributions of their ancient ancestors and avoiding all that nasty space business—too much math. 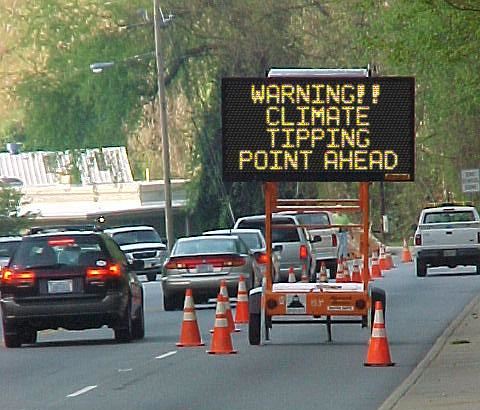 The United Nations in 2015, is once again issuing tipping point deadlines by which humanity must act in order to combat man-made global warming. See: Former UN Sec. Gen. Kofi Annan: ‘We must challenge climate skeptics who deny the facts’ – Warns of ‘tipping point’ – Touts carbon taxes – ‘World is reaching the tipping point beyond which climate change may become irreversible.’

May 2015 is also the deadline for another 2007 UN climate tipping point. See: 8 year tipping point expires May 4! Flashback 2007: ‘There could be as little as eight years left to avoid a dangerous global average rise of 2C or more’

But as far back as 1989, the UN was issuing ‘tipping points’ that have now long since expired. The UN claimed in 1989 that the world had to act to solve global warming by the year 2000 — or else!

You know, I’m beginning to wonder if we should take these people seriously…