In Update 42 and Update 43, I continued to report on the seemingly never-ending story of Marilyn Mosby’s failed prosecutions of the Baltimore police officers in any way involved in the arrest, and accidental, self-inflicted death of Freddie Gray. The Freddie Gray case archive is available here.

Among the continuing issues in the case are the lawsuits filed by most of the officers against Mosby and local Sheriff’s Department Major Sam Cogen, who signed the original probable cause affidavits (Update 35.6) against the officers, despite having no personal knowledge of the information to which he was attesting. He merely read from a sheet handed him by the prosecutors, and added a little spice here and there. Cogen later confirmed he had no hand in the investigation at all, and neither did any of his deputies, despite Mosby’s claims to the contrary. The “independent” investigation Mosby has always claimed she did, was entirely her own.

I’ve already reported that Mosby’s first attempt to have the civil suits against her dismissed failed. Now she’s lost a second battle, this time to avoid providing discovery, including depositions. Eli Hager, at the Marshall Project, reports:

When Freddie Gray died in Baltimore in April 2015, the city’s chief prosecutor, Marilyn Mosby, wasted no time in doing what prosecutors in other police-related deaths of African Americans had been slow to do: She went after the cops.

Within two weeks, Mosby rushed ahead of a grand jury to charge six officers in Gray’s death. After her decision, days of rioting and looting came to an end. The Black Lives Matter movement cheered her assertiveness. Trials began within the year.

Hager, I suspect unwittingly, is slightly misleading here. Prosecutors had been “slow” in other cases like the Michael Brown case, because the officers committed no crimes. Would but Marilyn Mosby have been so “slow.” The “days of rioting and looting” came to an end not because of anything Mosby did, but because the police finally began to do their duties after Mayor Stephanie Rawlings-Blake got caught saying she gave the rioters “space to destroy.” BLM thugs, however, certainly cheered Mosby.

But then things went wrong for Mosby. The criminal cases, which included second-degree murder and manslaughter charges, collapsed. In some, the police officers were acquitted; in others, the charges were dropped. And as Mosby’s tough approach disintegrated, the officers turned the tables — they took her back to court and sued her for something prosecutors are traditionally protected from: malicious prosecution.

Surprisingly, the U.S. District Court judge who is hearing their case, Marvin J. Garbis, has so far rejected Mosby’s arguments against the multimillion-dollar lawsuit, allowing it to move toward trial. In January, he quashed her effort to dismiss the case altogether. And on Monday, in rejecting her motion to stay the discovery process, he ordered that even as a prosecutor she must turn over her emails and be deposed under oath about a sensitive case.

Judge Garbis did this, in part, because Cogen has already turned over discovery, and the same information in any case against Mosby would also be used against Cogen. It’s also probable Garbis is continuing the case because he wants to discover the depth of Mosby’s involvement in her “investigation.” If it is as it seems to be, Mosby’s stepping completely outside her role as prosecutor by making herself an investigator, has exposed her to civil liability. This is, in large part, why prosecutors do not interview suspects and witnesses, or engage in any other facet of the investigator’s job.

I’m not aware of any lawsuits like this — against a prosecutor — that have been successful, whether it’s police officers bringing it or people who have been wrongfully convicted or anyone else,’ said Larry H. James, general counsel for the National Fraternal Order of Police and an expert on litigation involving law enforcement.

‘We felt ours was the one-in-a-thousand case,’ said Michael E. Glass, attorney for William Porter and Sgt. Alicia White, two of the officers suing Mosby.

Garbis has ruled that Mosby could yet be entitled to normal prosecutorial immunity — but not until the court has explored her approach to the Gray case, which she and her office investigated on their own, going outside the normal role of prosecutor. Mosby has said she did that precisely because she felt the police were not willing or able to investigate themselves; the Baltimore police department allegedly failed to execute search warrants on its officers’ cell phones.

The officers also criticized Mosby for moving to charge them before the grand jury could investigate. She did so, according to accounts of her thinking at the time, because she had recently watched grand juries decline to indict police officers for Michael Brown’s death in Ferguson, Mo., and Eric Garner’s in Staten Island, N.Y. 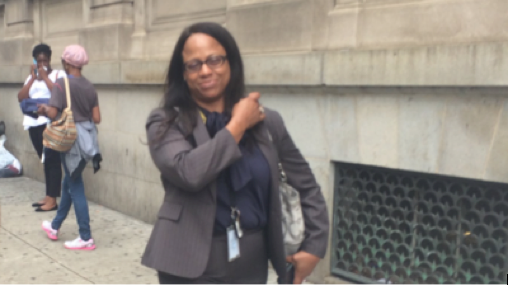 As I’ve previously noted, the police investigation proceeded carefully and professionally, as reporters embedded in the investigation have attested. Mosby’s quarrel with investigators was not because the police refused to do their jobs, but because they refused to mold their investigation to Mosby’s progressive narrative. As I noted in Update 35.7.3, lead Det. Dawnyell Taylor testified that when she testified before the grand jury, she was given a four-page narrative by the prosecution that was patently false. She also explained the prosecutors didn’t want to see any evidence that contradicted the narrative.

As I earlier noted, grand juries declined to indict officer Darren Wilson in the Michael Brown case because even the Obama Justice Department was forced to admit he acted not only in self-defense, but entirely within the law. In the Eric Garner case, the grand jury did not find probable cause for an indictment. In other words, they did their jobs—observed the rule of law–rather than supporting a lawless social justice narrative.

In permitting the suit to go forward, Garbis ruled that the officers can plausibly make claims not only of malicious prosecution — the theory that a prosecutor targeted you for a purpose other than justice and without any probable cause — but also for defamation, invasion of privacy, and violations of their civil rights. [skip]

‘What scares me about this case is that it’s a pretty strong signal from the police that prosecutors across the country should be careful about bringing charges when it comes to police misconduct… which most of them already are!’ said Daniel S. Medwed, a law professor and expert on prosecutors and wrongful convictions at Northeastern University School of Law.

‘Usually, we think prosecutorial immunity is bad, and this case is a fly in the ointment to that view,’ he said. ‘What’s challenging is that a lot of us would normally want prosecutors to be held more accountable for their charging decisions, but when it comes to making the brave decision to bring charges against police, maybe not.

Of course prosecutors should be careful in charging police officers. They should be careful in charging anybody! Such decisions are not in the least brave, as long as a competent and complete investigation was done, and there was clear evidence to prove charges beyond a reasonable doubt. Contrary to the opinions of some, police officers do not reflexively defend bad cops, but they do demand prosecutors have sufficient evidence. Police officers expect to receive no mercy if they commit crimes, even though they see common criminals routinely receive far more than the benefit of every possible doubt. In the Freddie Gray prosecutions, Mosby and her mini-mes had no evidence whatever, as Judge Williams’ careful and professional rulings demonstrated.

Lawsuits against prosecutors brought by ordinary citizens, not police officers, appear to be equally rare. The only partially successful one that most legal experts can name is the Duke University lacrosse case, which bears some key similarities to the suit against Mosby.

Three of the school’s varsity lacrosse players, all of them white, were charged with raping a black stripper who had been hired for a party. It turned out eventually that the woman had mostly lied. But the local prosecutor, Mike Nifong, finding himself in the national spotlight overseeing a racially charged case, failed to conduct a full investigation before bringing charges against the students. Nifong was later held in contempt of court, spent one night in jail and paid $1,000 as part of a settlement with the players.

This is, at best, a partially factual recitation of the facts of the Duke case. Nifong, in the midst of a racially charged reelection fight, shamelessly pandered to black voters, and not only egregiously withheld evidence from the defense, he actually suborned perjury, ordered a DNA lab to suppress evidence in reporting their results, and manipulated the police, who seemed only too willing to help, to commit multiple acts of malpractice. Knowing the Lacrosse players to be innocent, he persecuted them anyway. He was disbarred, lost his job and pension, and the State Attorney General took the extraordinary step of publically declaring the Lacrosse players not “not guilty,” but “innocent.”

Prosecutors can intentionally convict someone they know to be innocent, and still have immunity,’ said Chad N. Curlett Jr., a longtime attorney in the Baltimore area and chair of the criminal law section of the Federal Bar Association. ‘It’s kind of an extraordinary thing.’ [skip]

But as William Baude, a law professor at the University of Chicago Law School and formerly a clerk for Chief Justice John Roberts of the U.S. Supreme Court, put it, ‘If the case against Marilyn Mosby ends up going to trial, then something really unusual is going on here.

This is not the end of things. Mosby still has a variety of procedural motions she can make, and once substantial discovery is done, Judge Garbis might still rule Mosby has absolute immunity. That this case has been allowed to go this far indicates, however, that Garbis believes there is a substantial probability he will not grant Mosby immunity.

If this is the case, and things proceed, Mosby’s in real trouble. I suspect the defense will discover, in short order, many documents have been accidently misplaced, and hard drives accidently erased. But even if Mosby takes that route, there will likely still be more than enough documentary evidence to damn her. People like Mosby, certain of their moral righteousness, don’t bother to cover their tracks, at least not until they know they’re in trouble.

In addition, there are a great many former prosecutors that doubtless have knowledge of Mosby’s motivations and actions in this case that will be willing to testify against her. Two obvious examples are Sarah David and Lisa Phelps, who were assigned to prosecute several of the remaining officers. They resigned instead. I’ve always suspected their refusal, and the threat of exposure of Mosby’s true motives and knowing utter lack of evidence, played a large rule in Mosby’s grudging dismissal of all charges. I suspect even her mini-mes, Janice Bledsoe and Michael Schatzow will not willingly fall on their swords to protect Mosby. As I’ve previously noted, the Baltimore political establishment has already thrown Mosby under the bus.

I’m not sure if the State of Maryland is liable for damages in this case. The State AG’s office is defending Mosby, which is suggestive. I suspect that once substantial discovery is done, Mosby’s attorneys will be anxious to settle as cheaply as possible. If this turns out to be the ways things play out, they’ll surely demand all evidence be sealed. That would be a tragedy. The public deserves to know what Mosby did wrong. It would be a vital lesson, not only for them, but for every prosecutor in America.

And she brought it all on herself with her dedication to social justice rather than the rule of law.

4 thoughts on “The Freddie Gray Case, Update 44: The Dangers Of Embracing Social Justice”