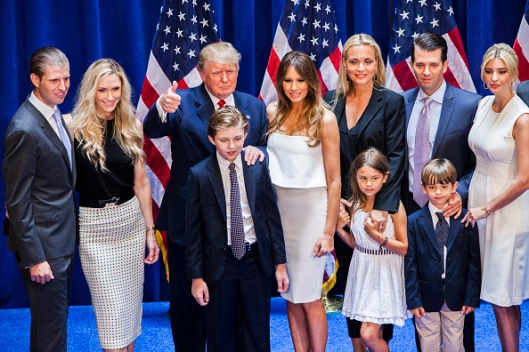 The publisher of the New York Times has recently published an open letter to subscribers that some are terming an apology. In actuality, he apologizes for nothing, but merely suggests the NYT wants to do better at journalism, as Michael Goodwin at The NY Post reports:

The Gray Lady feels the agony of political defeat — in her reputation and in her wallet.

After taking a beating almost as brutal as Hillary Clinton’s, the New York Times on Friday made an extraordinary appeal to its readers to stand by her. The publisher’s letter to subscribers was part apology and part defense of its campaign coverage, but the key takeaway was a pledge to do better.

‘After such an erratic and unpredictable election there are inevitable questions: Did Donald Trump’s sheer unconventionality lead us and other news outlets to underestimate his support among American voters?’

While insisting his staff had ‘reported on both candidates fairly,’ he also vowed that the paper would ‘rededicate ourselves to the fundamental mission of Times journalism. That is to report America and the world honestly, without fear or favor. 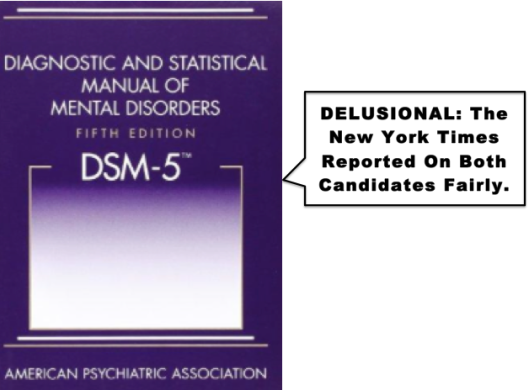 The NYT “reported on both candidates fairly.” I believe that’s the exact text under “delusional” in the new Diagnostic and Statistical Manual of psychiatric disorders.

I thought this little article, written at the beginning of November, but never posted in the rush of election coverage, might serve as a reminder of the kind of “fair” coverage of the election for which the NYT was justly infamous. I might also provide a hint about how sorry they are, and how likely they are to actually become an unbiased newspaper.

We know that nearly 100% of all media employees that donated to a political candidate this year donated to Hillary Clinton. That’s not at all unexpected, and is just one indicator of the incredible partisan bias of the media, which all but ignores Clinton’s felonies and reports on every time Donald Trumps sneezes. But now: a new low. The New York Times—which is no surprise—is now reporting on a 7-year old’s nightmare involving Donald Trump.

Just in time for Halloween, the Paper of Record published a seven-year-old’s nightmare sure to send chills down the spine of many Hillary Clinton supporters: Out of nowhere, Donald Trump appeared.

That alone may scare even the most intrepid New York Times reporter, but it gets worse: this isn’t “bad-hair Donald,” this is ‘zombie’ Donald, and he’s going from house to house evicting Muslims and throwing them in jail.

The dream was described to the paper by a seven-year-old Muslim girl living in New York City’s ‘whitest’ borough, Staten Island. She reportedly had the nightmare after watching the second presidential debate with her family when Trump called for a ‘total and complete shutdown of Muslims entering the United States.’

She reportedly told her father about her vision of the “zombie Donald” and he reassured her.

The article, titled “I Had a Scary Dream About Donald Trump: Muslim Parents Face a Tense Election,” investigates far more serious issues later on and, of course, nobody likes to read about a distressed seven-year-old. But some of the paper’s online critics labeled the article another hit job against Trump, this time using a child to sell the point.

Is there no level too low for you to sink, you fear mongers? Bringing a child into this?’ one commenter on Facebook posted.

Is there no level too low for the NYT? Is this a trick question?

The article features a series of photographs that include pictures of Elcharfa’s childen gazing at a Trump campaign sign as though they were stopped in their tracks and a picture of Elcharfa tucking his daughter into bed.

The girl’s father told The Times he came to the U.S. from war-torn Lebanon with ‘the hopes of raising a family in the safety in the United States.”

Ah! So he’s just the hard-working father of another immigrant family trying to assimilate and become an American! Just like all the other similar fathers shilling as Democrat agents and exploiting their children to attack Donald Trump. How does this sort of story get to the media anyway? A father wakes up and says to himself: “Self,” he says, “I must tell the New York Times about my 7-year old daughter’s horrible dream about a presidential candidate. I’m sure they’d love to print such important news?” Yeah, that’s the ticket!

Of course, he doesn’t bear all the blame. The NYT is ultimately culpable. What’s next? Sad eyed little girls holding sad-eyed, adorable puppies frightened by the sight of Trump on television? Little old ladies claiming, two decades ago, Trump failed to hold open a door for them? Buddhists complaining Trump once stepped on an insect in their presence? People claiming Trump’s promise to repeal Obamacare has given them cancer? I’m sure any of those would be worth an above-the fold—page 1 headline in the birdcage floor liner of record.

And just wait until I send the NYT my latest nightmare about Hillary! It starts with her in green makeup and a pointy hat, cackling and rubbing her hands, screaming obscenities at her Secret Service bodyguards, who are hideous, cringing flying monkeys, while simultaneously erasing the contest of 13 Blackberrys, laptops and iPads. Then the Director of the FBI comes in, and she begins whipping him, while he cries “thank you your Highness; may I have another?” Then Hillary turns to me, her eyes wildly gyrating in different directions, and hideously cackles, while coughing, “you and your little Constitution too, my pretty!” That’s when I always wake up, covered in sweat and gasping for breath.

3 thoughts on “Trump: Scaring Livestock and Stampeding Women And Children”