In August of this year, I posted Electric Vehicles: Whoo Too!, which told the tragic tale of a Tesla Model S on a test drive in France which, for no apparently reason and quite spontaneously, burst into flame and was reduced to a smoldering lump within five minutes. Fortunately, no one was injured. Wondering about how that rather exciting jaunt affected the test driving’s couple ardor for the Model S, I wrote:

Gee, I wonder if this inspired the couple to buy a Tesla? Perhaps they were hot for the car? Or they had a burning desire to buy one? Most likely, their passion for that particular EV went up in smoke with the Model S.

That was rather a pricey fire, too. According to Edmunds.com, the average price of a Tesla Model S these days is $98,700. If I bought one, I’d have to live in it.

Now we have a follow up report from Fox News:

A fire that destroyed a Tesla in France last month was caused by a loose electrical connection, according to the automaker.

The blaze occurred outside the city of Biarritz on August 15th during a promotional test drive event called the Electric Road Trip.

Two guests and a Tesla representative were in the Model S 90D when the driver, Nicholas Cano, says there was a loud noise and the Tesla employee told him to pull over. The three got out safely just before a fire started that fully engulfed the car in flames within five minutes.

Cano did not file a complaint with local authorities but says he was “shocked” when Tesla didn’t contact him after the fire to ask how he was doing. However, he says that someone did call a few days later as if nothing happed to offer him another test drive.

You have to admire that kind of Clintonian hard-sell technique.

After a weeks-long investigation, Tesla’s communication manager in France, Charles Delaville, told Fox News that it has been determined that ‘the fire was caused by a bolted electrical connection that had been improperly tightened.’

‘Usually, these electrical connections are installed by a robot, but for this car this connection was installed manually. There has never been a similar incident in another one of our cars,’ Delaville said.

Delaville did not offer any further detail as to what the wire was connected to, or why it needed to be installed by a human. As its name implies, the Model S 90D has a battery pack that holds 90 kilowatt-hours of energy, enough to power the average American home for about three days, according to the U.S. Energy Information Administration. 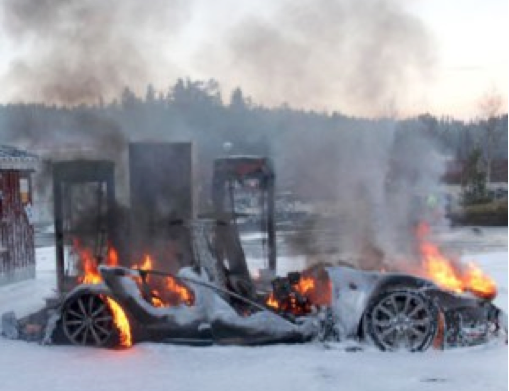 A former Tesla off to join the choir invisible…

Hmm. Something seems rotten in the state of France. Delaville seems to be suggesting that a “bolted electrical connection” wasn’t tightened right because that particular connection is usually tightened by a robot, but this one was tightened by a human, causing the entire car to spontaneously burst into flame. That must be rather a volatile connection, something like the drive plasma conduits on the Starship Enterprise. On the Enterprise, at least, a loose connection doesn’t usually result in an unstoppable warp core breach. Obviously that’s not the case on the Model S.

But wait! There’s more! Fox seems to think the problem was not that a human screwed up the screwing up–or perhaps “bolting up”–of the connection, but that it should have been tightened by a human, thus implicating a robot, which may well indicate robophobia.

This is all very confusing, except the part about the battery holding 90 KwH of energy, which, if not handled with proper tools and proper procedures, can reduce a first responder, or an unwary Tesla mechanic, to a smoldering lump of formerly human electric conductor.  But not to worry: would you like to try your luck a second time Mr. Cano?

I’ll end this article as I ended its forerunner:

Full Disclaimer in the hope of heading off outraged and obscene responses from EV owners and enthusiasts:

As I have maintained since my first article on EVs, if you desire an EV and have the money for one, by all means, buy it. Buy one for every day of the week and change them like underwear if that pleases you, and I wish you good fortune and happiness with your choices–in cars and undies. That’s one of the great things about America.  The fact that most of us wear clean undies is pretty great if you think about it.

However, don’t think to use your preference and your ability to afford an EV as a bludgeon with which to beat everyone else into submission and acceptance of your choices and preferences. The problem with EVs is, and will continue to be, they cost far too much and they don’t have the range and flexibility necessary for most Americans. Greenies and bureaucrats surely see EVs, and forcing people to buy them, as an essential part of their power base, but reality continues to intrude. The laws of physics continue to remain a frustrating barrier.

I also do not suggest that your EV is inevitably going to burst into flames in your driveway or garage. That remains relatively rare. However, it is possible, and something the rational person thinking of buying an EV might want to consider.

Perhaps the most significant indicator remains Mr. Obama himself, who, lo those many years ago, promised to buy a Chevy Volt when he left office. I wouldn’t be holding my breath on that one. Buying a Volt, I mean. He’ll probably leave office. Probably.