It has taken years, but it appears cosmic justice has finally caught up with Angela Corey. Regular readers will recall, I’m sure, Corey was the Florida prosecutor responsible for the grotesquely unlawful and unethical persecution of George Zimmerman, a case I’ve covered in great detail since its inception. The case archive is available here.  The New York Daily News reports:

Angela Corey, the Florida prosecutor who bungled George Zimmerman’s murder trial in 2013, lost her long-held seat in a landslide primary election to a GOP newcomer.

Corporate lawyer and former prosecutor Melissa Nelson easily snagged 64% of the vote in the State Attorney race, banking on three years of scrutiny that plagued Corey for failing to convict Zimmerman in the 2012 death of Trayvon Martin.

Nelson will move on to the general election as the chosen Republican and will face off with a Democratic write-in candidate to reign over Florida’s Fourth Judicial Circuit Court.

Corey will officially end her third term in office the first week of January.

News coverage of the case, then and now, tends to continue the progressive, social justice narrative that was the driving force behind the prosecution of George Zimmerman. As I’ve often written, the narrative was, for the left, irresistible. A cherubic little black boy, a veritable future Rhodes Scholar, armed with nothing but tea and Skittles, desperate to return home with food for his little brother, was pursued and murdered in cold blood by a huge, hulking “white/Hispanic.” Thus, poor Angela Corey was scrutinized for “failing to convict Zimmerman.” Fortunately for the rule of law, and despite the best, unlawful efforts of Corey and her deputy prosecutors, the case was not decided on the narrative, but by the evidence. Actually, the lack of evidence: there was none. It was a classic, unmistakable case of self-defense.

I will figure out what it was about our stellar record that I was not able to communicate to the voters,’ WOKV-TV reported Corey as saying in a concession speech late Tuesday. ‘And once I figure that out, I will sit down and let you all know what I could have done better. But I know one thing that will never waiver. And that’s my love and devotion to the people of this community and to all of you.

After losing the Zimmerman case Corey and her deputies, unlike most prosecutors, demonstrated no adult, professional grace, but complained, whined and defended their behavior during the case. Not only did Corey and her minions conceal and slow roll exculpatory evidence, their case in chief actually proved self-defense, reducing them, in their closing arguments, to arguing Zimmerman should be convicted not on the evidence—there was none—but on emotion.

Zimmerman was also blessed with two excellent lawyers in Don West and Mark O’Mara. Where the prosecution urged the jury to ignore the law and make emotional decisions, the defense argued the law and logic. It was truly a backwards trial.

But this was not Corey’s only misstep. She ran her office like a mean 13 year-old, attacking anyone that fell from her favor, particularly those that actually demonstrated ethics. An angry, cruel, and vindictive woman, Corey’s personality eventually caught up with her.

Gov. Scott, in concert with Florida Attorney General Pam Bondy, appointed Corey in response to the media generated social justice narrative, obviously as a means of appeasing black activists. Coincidentally, or not, Corey was in the midst of an election battle and was losing on the basis of her poor relations with the local black community. Despite the fact the local prosecutor and police correctly determined that Zimmerman acted in self-defense, she seized on the opportunity to charge Zimmerman with murder, and violated virtually every ethical canon in the process. Fortunately for her, Zimmerman drew two pro-prosecution judges that allowed Corey to get away, figuratively, with murder, though the first judge was removed from the case due to his over-the-top obvious prejudice against Zimmerman.

In the trial’s aftermath, Corey rejected criticism she over-charged Zimmerman. The top prosecutor acknowledged her legal team have second-guessed their ability to prosecute the wannabe lawman.

‘I don’t think that we overcharged,’ Corey told CBS News after the trial fizzled. ‘He killed a young man because he thought he was a criminal and he should be held accountable for what he did.

This was another unsavory Corey trait: the inability to recognize or admit to mistakes. The case was never close. A first year law student could have determined it was self-defense, hence Zimmerman should never have been charged, just as the police and local prosecutor concluded. This put Corey’s prosecutors in the bizarre situation of treating the police as hostile witnesses.

Another unsavory Corey trait was a Hillary Clinton-like tendency to lie. Zimmerman, on his way to a grocery store on a dark and rainy night, spotted Martin lurking in his gated neighborhood, and on the lawn of a home that had been recently burglarized. Martin, wearing a hoodie with the hood up, appeared to be casing the area, something any reasonably observant person would conclude. In addition, Zimmerman, who wasn’t sure of Martin’s race, thought Martin was acting as though drugged.

Zimmerman was right. Martin was high on pot, and was carrying not tea, but a watermelon flavored concoction, which, with Skittles, were two of the three essential ingredients of a illicit drug mix called “lean” or “purple drank.” Martin often boasted on social media of using it.

Corey and social justice cracktivists claimed Zimmerman “profiled” Martin, but no such thing occurred. His observations of Martin were based entirely on the circumstances and Martin’s suspicious behavior. Martin was a criminal. A wannabe thug, he often posed and postured on social media, including smoking pot, displaying an illegal handgun his father helped him obtain, and wearing false gold teeth. He also imagined himself a street fighter and bragged about hitting people in the nose and making them bleed, precisely what he did to Zimmerman. In fact, Martin was only in Sanford, living in his father’s girlfriend’s condo, because he had been suspended from school for ten days after being caught with marijuana residue, a burglary tool and items taken from a nearby home in a burglary. Rather than the smiling, slight 12 year old portrayed in media photos, Martin was a tall, muscular 17 year-old, much more physically imposing and capable than George Zimmerman.

Zimmerman never chased Martin. He merely went in the same direction of Martin’s flight, trying to keep him in sight—at the specific request of a police dispatcher—for the police officers that were on the way. After losing sight of Martin, and finally hanging up his phone, Martin, who could have easily been safe indoors and never seen again, chose to hide in the rain, and ambushed Zimmerman, sucker punching him, breaking his nose and knocking him to the ground. Martin mounted Zimmerman, and repeatedly smashed his head into a concrete sidewalk while beating him, MMA “ground and pound” fashion. 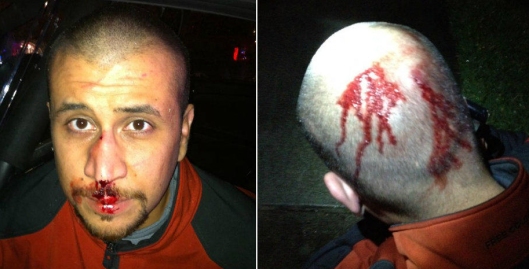 Stunned, injured, bleeding, being beaten into unconsciousness, Zimmerman drew his concealed handgun and fired a single round that killed Martin. Zimmerman fully cooperated with the police, and all of the evidence, including witness statements, physical evidence, and Zimmerman’s multiple statements, proved self-defense. It was not a close call.

Even though it was in large part the prosecution that inadvertently proved the factual truth of the case, Trayvon Martin is still lauded as a holy social justice martyr, a state of affairs that has been perpetuated in no small way by Angela Corey.

My direct coverage of the Zimmerman trial began with Update 32 and continued through Update 35.  However, I suspect readers may want to read Update 36,   which details the aftermath of the not guilty verdict, including Corey’s delusional evasions. Andrew Branca at Legal Insurrection also covered the Zimmerman case. His thoughts on this matter are worth your time.

To get a better understanding of why the Zimmerman prosecution was doomed to fail, you might also want to revisit this classic article on their star witness, Rachel Jeantel. Deputy Prosecutor Bernie De La Rionda interviews Jeantel in an utter disaster that was repeated on the witness stand. In a bizarre turn, Trayvon Martin’s mother was sitting next to Jeantel during the interview. This was not revealed until months later, and represented yet another astonishing lapse of professional practice and obligation. Interviews must be untainted by any possible influence. It’s hard to imagine a greater potential for malign influence that seating a victim’s mother next to a witness. This kind of lunacy was common in the Martin case.

One of the significant problems with the American criminal justice system is that prosecutors have virtually unlimited discretion, and, for all intents and purposes, absolute immunity. Such discretion is necessary, and when wielded by an honorable, ethical prosecutor, can not only ensure that the guilty are properly punished, but the innocent are unmolested. And there’s the catch: honorable and ethical.

Angela Corey and Marilyn Mosby have demonstrated what happens when politically driven, dishonorable and unethical people hold that important and powerful office. In the Trayvon Martin and Freddie Gray cases, a substantial element of racism—against the innocents caught up in those cases—also worsened the effect of the abuses of Corey and Mosby, which should have been unlawful.

Judges may, if they are willing, enact meaningful sanctions on prosecutorial abuses, but Judge Debra Nelson in the Martin case was so blatantly biased she allowed the prosecutors to flaunt the law and the Constitution. Even a generally honorable judge like Barry Williams in the Gray prosecutions, while sternly lecturing the prosecutors, and occasionally ruling some of their evidence and tactics out of bounds, did nothing to give unethical prosecutors in the future reason to behave ethically.

Bar associations in each state can also enact meaningful sanctions, but all too often, are focused far more on protecting the profession rather than upholding the Constitution and rule of law.

Until legislators enact careful and narrowly tailored laws that limit immunity for out of control prosecutors, laws that allow civil and even criminal sanctions, as well as penalties such as removal from office and loss of law licenses, abusive, vindictive, would-be tyrants like Angela Corey will be removed only via the ballot box, a process that all too often takes many years, and untold misery for the innocent.

In this case, justice was a long time in coming, but it finally arrived.

12 thoughts on “The Trayvon Martin Case, Update 47: Justice At Last!”