I am not among the throng who think a President’s job to be Comforter-In-Chief. Bill Clinton might be blamed for this idiotic idea when he came up with the idea of traipsing around the nation whenever anything bad happened, to be photographed hugging a widow, child, etc., and muttering “I feel your pain.” Of course, such displays were all about Clinton, not the people whose pain he supposedly felt, often accompanied with a meaningful bite of his lower lip, and when he was particularly wound up, a staged tear or two. A flood or tornado are not occasions for a presidential photo op, which does nothing more than aggrandize the president. Any local that thinks “the president cares about me!”–particularly our current president–is deluded. Any federal help a state needs is not expedited by a lachrymose presidential jaunt.

Still, there is, as usual, a double standard. During Hurricane Katrina, the Media relentlessly abused President Bush for his mostly non-existent failings, while ignoring the horrific failings of local authorities, but Barack Obama, golfing blithely on Martha’s Vineyard, can barely be bothered, and certainly can’t be criticized, for doing far, far less than Bush. One thing Obama has done, however, is to insult the afflicted denizens of flyover country, as the Washington Times reports:

President Obama has refused so far to survey the Louisiana flood disaster, but he did let state and local officials know that he’s watching to make sure they don’t engage in racial discrimination.

Actually, Mr. Obama’s press office has announced he plans a August 23rd visit to the area. This, no doubt, because he was badly upstaged by Donald Trump, who showed up with an 18-wheeler packed with relief supplies, which he helped to unload and distribute. He also refused to turn his visit into a photo op. Hillary Clinton has also failed to put in an appearance.

In a 16-page guidance issued Tuesday, the Obama administration, led by the Justice Department, warned Louisiana recipients of federal disaster assistance against engaging in ‘unlawful discrimination on the basis of race, color, or national origin (including limited English proficiency).’

The guidance’s frameworks ‘highlight the importance of complying with nondiscrimination requirements of civil rights statutes, addressing the needs of the whole community, and ensuring equal opportunity to access recovery efforts.

Barack Obama, and similar microscopic intellects, really do think we simple folk living in flyover country are helpless without their “guidance.” Why, absent federal threats, people in Louisana would leave minorities, and those with “limited English proficiency,” to drown and starve!  Apparently one can tell who can’t speak good English from some distance.

Needless to say, some Louisiana residents were offended, including the American Conservative’s Rod Dreher, who took umbrage at receiving an anti-discrimination lecture from Washington, D.C., as locals struggle to rescue, house and feed their neighbors.

‘[E]verywhere you look you can find black folks and white folks loving on each other, helping each other through this crisis,’ Mr. Dreher said in a Thursday post.

He referred to the guidance as a ‘long bureaucratic memo’ issued by the “Department of Justice and many other agencies of the executive branch overseen by He Who Cannot Be Troubled to Leave Martha’s Vineyard.

Hmm. What, exactly, does the Department of Justice, have to do with disaster relief? I don’t recall ever seeing DOJ helicopters rescuing stranded mariners, or plucking people of rooftops.

The administration guidance cited instances of discrimination in Gulf Coast states after Hurricane Katrina and Hurricane Rita in 2005, such as ‘numerous media reports [that] showed images of African Americans stranded on roofs in New Orleans.’

‘These images exposed significant inequalities in access to emergency response and recovery efforts,’ said the guidance.

I was pondering “how stupid can the feds get,” and then I read this. Obviously, they haven’t come close to plumbing the depths of stupidity. I suspected one might find plenty of photos of white people stranded here and there during Hurricanes Katrina and Rita. In fact, a ten second Google search for photos produced these from Hurricane Katrina.  There were many, many more: 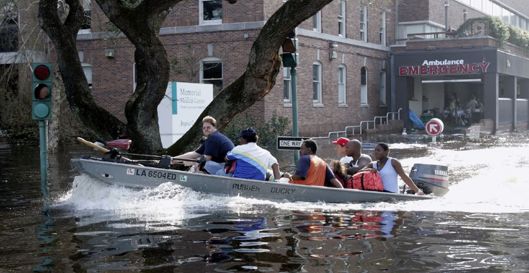 Notice that Blackhawk helicopter rescuing black people trapped on a roof. Might I be so bold as to suggest that in disasters, it’s not possible to rescue everyone at once, particularly when thousands are in need of rescue, and random photographs of black people on roofs are not evidence of racial discrimination, but of the nature of disasters, and the carrying capacity of scarce helicopters?

Mr. Dreher said such discrimination is wrong and Louisianans need to ‘own our mistakes,’ but that residents knee-deep in rescue efforts don’t appreciate being painted with the administration’s broad brush.

He quoted an email from a local named Jimmy who said, ‘Not many things get me seething, but this does,’ calling Obama administration officials ‘dividers instead of uniters.’

‘Look no further than this ‘guidance’ press release telling us in the middle of it to be sure not to be racist, y’all,’ said the email.

Dreher doesn’t specify the mistake of the locals, but I assume he’s speaking for the legacy of racism a half-century in the past. Sorry, but every possible apology for that has long been exhausted. Where’s the evidence of even the slightest discrimination in the current rescue effort? How do we reconcile the Obama Administration’s certainty that locals just brimming with racism are waiting to manifest it with the Cajun Navy, comprised of citizens, probably mostly white, spending their own money and resources to rescue anyone and everyone?

Where race is concerned, Barack Hussein Obama is perhaps the worst example of projection imaginable.

This is America, Mr. President.  This is how Americans think and act.  You can’t leave the White House nearly soon enough.