Watching the Democrats, and their train wreck of a convention, a few thoughts come to mind:

The Democrat Party truly is a criminal enterprise masquerading as a political party, and those willingly participating in it, actors in a continuing criminal conspiracy.

It’s amusing, in the way that a bloody car wreck is horrifically, ironically amusing, that any Democrat is in any way surprised that a criminal conspiracy might be fundamentally dishonest.

How could anyone believe that a party that compromised the FBI and the Department of Justice would not simultaneously screw its own–and the American people?

How could anyone believe that a party whose nominee for president has compromised national security in the commission of innumerable federal felonies was somehow on the up and up? 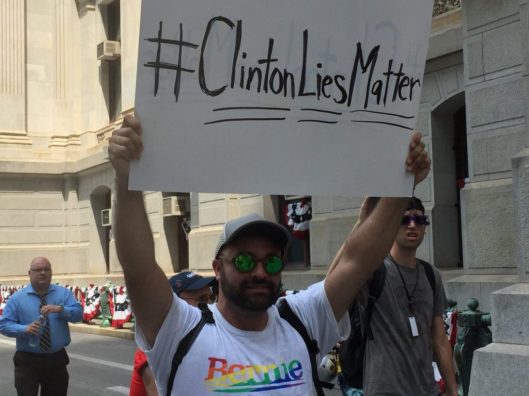 Democrats are blaming the Russians for the leak of DNC E-mails, claiming they intend to hurt Hillary and boost Trump. They are oblivious to another effect: if the Russians are responsible, they’re demonstrating their utter contempt of, and utter lack of fear of, Hillary. That’s not exactly an argument for electing her. And why the Russians might want to help elect a guy who almost certainly will use military force as required is unanswerable.

Bernie Sanders was right: the entire primary process was rigged to ensure Hillary Clinton would get the nomination.

There were multiple signs of this. For example, Sanders convincingly won multiple states, yet Clinton got most, or all, of the delegates. 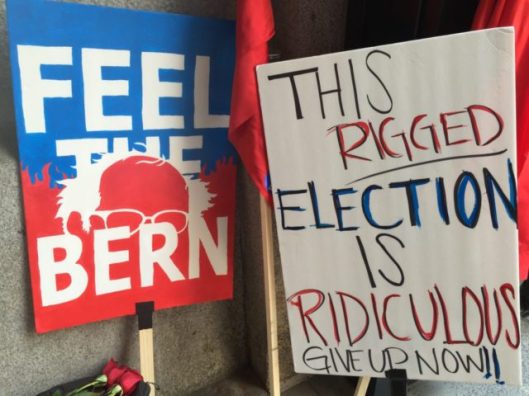 The most obvious early example of a rigged process: superdelegates.

Democrats are the caring party. They care for the poor, and minorities, etc. ad nauseum, except when their e-mails reveal their leaders to be bigots, racists, anti-religion, anti-American, and in general, nasty, small-minded, ugly trolls.

Another ridiculously blatant, in-your-face sign of a rigged process: The ink was not yet dry on Debbie Wasserman Schultz’s resignation as head of the DNC when she was made honorary chairman of Hillary Clinton’s campaign.

Tone deafness alert: with whom did the Democrats replace Wasserman-Schultz? Baltimore Mayor Stephanie Rawlings-Blake. Remember her? She’s the mayor who said she gave rioters “space to destroy,” which space they gleefully used, then lied about ever saying it. She’s the mayor who ordered the police to stand, impotent in the face of rioters, causing many to be injured. She’s the mayor whose actions have resulting in Baltimore officers fleeing as fast as they can, and the violent crime rate skyrocketing in the space of a year. She’s the mayor who, even in progressive Baltimore, who dropped her reelection bid. There went any Democrat attempt to portray their criminal conspiracy as the law and order party. Actually, being a criminal is a qualification for office for Democrats, not a disqualification.

Last night, an old (74) and voice-worn Paul Simon sang Bridge Over Troubled Water to the assembled conspirators. A better choice would have been Still Crazy After All These Years.

Bernie Sanders pled with his fellow conspirators to elect Hillary Clinton, because she’s a criminal and she screwed him and most other Democrats. That’s a good reason, isn’t it?

Democrats are devoting an entire day of their convention to gun control, which they, once again, hope against hope, will be a winning issue for them. I know of no other issue so indicative of their congenital, corporate derangement.

Hillary has promised to work every day to destroy the Second Amendment.

Hillary has promised to destroy the First Amendment, making any criticism of her illegal.

Hillary has promised to destroy the lives of the citizens of many states that work in the coal industry.

To Democrats, these are positive promises. To the rest of us, they are among the very few promises Clinton will keep.

Perhaps being presented with irrefutable evidence of the corruption, cruelty, viciousness, and inhumanity of the Democrat party and its leaders will cause everyday Democrats to reassess their choice of political philosophy…Naaaaaaaaah.

And the Dems accused Trump of making a “dark” speech. Hang on folks, this roller coaster is going to jump the tracks.

12 thoughts on “The Democrats Did WHAT?!”