As regular readers will doubtless remember, I have often written about leftist ideology. Paramount in leftist thought—such as it is—is the principle that leftist policies, no matter how idiotic on their face, no matter how spectacularly and often they fail, can never be wrong. They’re not wrong; the people who thought they were wrong were mistaken. This unfortunate tendency to double down on disaster was nowhere in greater evidence of late than at the 17th annual White Privilege Conference held in Philadelphia.

I was not aware that there had been 16 prior conferences, but that omission is no doubt due to my white privilege. And to think: I’ve been missing out on 16 years of self-flagellation for working my buns off my entire life and believing the world owed me nothing at all, despite my general blue-eyed, pale-skinned whiteness.

One would think such a conference would be a safe and diversity-friendly place, however, as John Belushi used to say: “but noooooooooooooo! Consider the horrific reality from participants of the conference, courtesy of heatst.com:

Even at the White Privilege Conference, blatant, brutal racism runs amok! It’s just like Democrat-controlled cities: they’re all cesspools of racism, sexism, and violence. And imagine the horror of this:

Certainly no white person of the same gender and approximately the same size, shape and hair color—brown—has ever been mistaken for another white person. And imagine the unimaginable horror of this:

It’s almost unfathomable. POC and indigenous ppl come to their very own white people bashing conference and find themselves unsafe! Who coulda thunk it? But the horror was just beginning:

The disaster of understanding culminated in the keynote speech, delivered by Jim Loewen, a demonstrably progressive sociologist, respected professor of African American Studies and perhaps the country’s leading expert on racism in the deep south during the Confederacy and beyond. Little did Prof. Loewen know, as he was delivering his speech, that his very act of speaking to the audience was cause for concern.

Imagine the consternation of poor Professor Loewen, a man who doubtless imagined himself an intolerant, politically correct, perpetually outraged progressive, a man ashamed of his own privilege and whiteness, when people at the White Privilege conference, a conference whose premises he unquestionably believed and took to heart, was accused of white supremacy. And for what? Allegedly running over the time allotted for his speech about white supremacy: 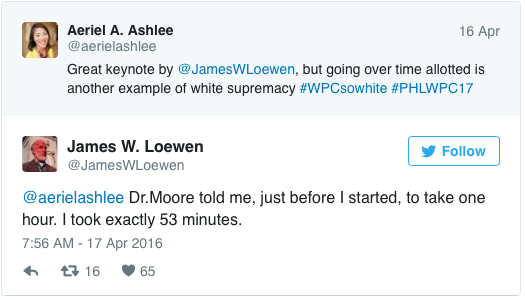 But wait a white privileged moment! He didn’t go over his allotted time; so what’s the problem?

Of course. The facts don’t matter. The accused must lay down and accept the death sentence. Aeriel A. Ashlee was completely wrong, but because she’s non-white, she has absolute moral authority and can’t possibly be wrong. The issue is that Professor Loewen is demonstrating his white privilege defensiveness instead of accepting responsibility for what he didn’t do wrong. Progressive ideology cannot possibly be wrong!

But it’s even worse, gentle readers, than we, with our white privilege, can possibly imagine. Professor Loewen used the “N” word!

You see? You see?! He used the “N” word in a historic sense, to ridicule and expose those who actually used it in the process of harming blacks and denying them their rights. It was a quotation used to educate the audience. And what did Professor Loewen do? Once again, white privileged male that he is, he tried to worm his way out of his egregious offense against POC and indigenous, unsafe ppl with facts. Yet again, he demonstrated his white privilege defensiveness instead of accepting responsibility for what he didn’t do wrong. Yet again, Progressive ideology cannot possibly be wrong!

But examples of the imperviousness of Progressive ideology to fact and reality are not limited to white privilege conferences, no. Rick Moran at PJ Media explains:

At Austin Peay University in Tennessee, the campus erupted in outrage when rainbow nooses were discovered hanging from a tree. Social media exploded and every social justice warrior on campus felt the need to express their displeasure.

Well, why shouldn’t they be outraged? Everyone knows that rainbows, symbols of beauty, hope and renewal have been culturally appropriated by gays, perhaps even the entire LGBTQWERTY community, whatever that might be today. What’s that you say, because they’re not specifically white privileged, they can’t be guilty of cultural appropriation? They can appropriate anything they want from white culture? Oh. And I apologize for not taking responsibility. But let’s get back to the point:

But later, it was discovered that the nooses were an art project by a student looking to draw attention to the high number of suicides in the LGBT community. 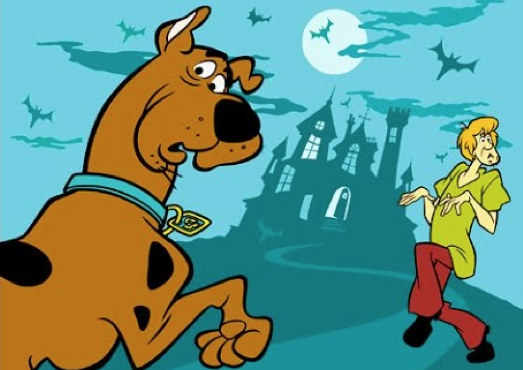 Ruh-roh Shaggy! One might think that would be the end of it. Rational people would expect the perpetually outraged to admit the cause of their latest outrage was, well, outrageously wrong. But nooooooooo!

‘This is a lesson for everyone about sensitivity and respect for all people and how inclusive and understanding we need to be as a campus community,’ Austin Peay President Alisa White said in a statement. ‘While we support the freedom of expression on our campus, we also have to keep in mind that there are symbols that have very specific and negative meanings to everyone, especially if context is not provided. Therefore the artwork was inappropriate and had to be removed for the safety of our campus.

The rainbow nooses were an attempt to draw attention to what rational progressive people might think a worthy progressive cause, but such good intentions must inevitably give way to more important principle: no leftist idea, assertion or policy can possibly be wrong. Oh, and I might be mistaken about the idea that there is such a thing as a rational progressive person. After all, what the hell do I know? Me with my white privilege and all…

White, the university president, had called the incident ‘deeply disturbing’ and ‘hurtful,’ arguing that regardless of how it was intended, it did not belong at Austin Peay.

‘I am saddened,’ she said in a statement Monday night, ‘and I am sorry for the hurt and offense this has caused and want our students, faculty, and staff to know that it will not be tolerated.

35 thoughts on “Progressives: Bayonetting Their Wounded”