The tenor and tone of President Obama’s latest apology tour keeps dribbling in. The latest bit of drool comes from Legal Insurrection, which is reporting on Mr. Obama’s enlightened views of Capitalism and Communism:

President Obama continued his ‘Spring Break’ from America by undermining the foundations of the country’s successful economic system.

After dancing the night away, Obama was addressed the Young Leaders of the Americas Initiative Town Hall at Usina Del Arte in Buenos Aires, Argentina: 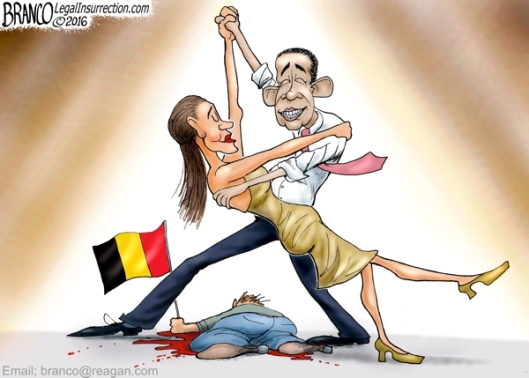 ‘I guess to make a broader point, so often in the past there’s been a sharp division between left and right, between capitalist and communist or socialist. And especially in the Americas, that’s been a big debate, right? Oh, you know, you’re a capitalist Yankee dog, and oh, you know, you’re some crazy communist that’s going to take away everybody’s property. And I mean, those are interesting intellectual arguments, but I think for your generation, you should be practical and just choose from what works. You don’t have to worry about whether it neatly fits into socialist theory or capitalist theory — you should just decide what works.

Prior to Barack Obama, I never thought to hear an American President praising Communism. One wonders, what, exactly, “works” about Communism? Is it the secret police? The gulags? The torture and political murders? The deaths of more than 100 million in the last century? The abject poverty, starvation and degradation? The state monopoly on the ownership of property? The rampant alcoholism? The aggression of communist states toward their neighbors? Does all of that “work?”

Mr. Obama praised the Castros for their magnificent education system, without mentioning, of course, that much of it consists of state-mandated propaganda. He praised them for their universal medical care, without mentioning, of course, that there are two distinct medical systems in Cuba and in every other communist country: the lavishly funded system for the elite scientific communists, and the rat and insect infested, filthy and dirt poor, crumbling edifices for the rest of society.

One only need visit North Korea to discover the wonders of Communism and how it “works.” There, the people are grotesquely malnourished, shorter and smaller than their South Korean kin. They are reduced to eating grass and tree bark, when they can find it, for mere survival.

So Mr. Obama saves Cuba when it’s economy was about to finally, and forever, collapse, likely leading to the collapse of one of the few, and most vicious, Communist regimes on the planet. And he infuses the Castro’s bank accounts with taxpayer cash, and praises Communism, significant parts of which, in his deranged imaginings, “work.” For all of this, he asks nothing of the Castros, who were imprisoning their citizens even as Mr. Obama trod Cuban soil.

Ah, but the Castros must be grateful, no? No, as The Guardian reports:

Fidel Castro has responded to Barack Obama’s historic trip to Cuba with a lengthy and scornful letter that recounts the history of US aggression against Cuba and reasserts its independence with a warning to the American leader that ‘we don’t need the empire to give us any presents’.

The 1,500-word letter published in state media, titled “Brother Obama”, was Castro’s first response to the president’s three-day visit last week, in which the American president said he had come to bury the two countries’ history of cold war hostility.

Speaking in Havana, Obama said it was time for the two countries to look forward “as friends and as neighbours and as family, together’.

But in his letter Castro dismisses Obama’s comments as “honey-coated” and said that Cubans “ran the risk of having a heart attack on hearing these words from the president of the United States’.

My humble suggestion is that he reflects [on the US role in South Africa and Cuba’s in Angola] and not now try to elaborate theories about Cuban politics,’ Castro says. [skip]

In the letter Castro also takes aim at the tourism industry in Cuba, which has grown further since Obama’s rapprochement with Raúl Castro in December 2014. He says it was dominated by large foreign corporations which took for granted billion-dollar profits.

The focus on US-Cuba business ties appears to have particularly rankled with Castro, who nationalised US companies after coming to power in 1959 and establishing the communist system into which his brother is now introducing gradual market-based reforms.

The Obama administration says re-establishing economic ties with the US will be a boon for Cuba, whose centrally planned economy has struggled to escape from overdependence on imports and a chronic shortage of hard currency.

In response Castro writes: ‘No one should be under the illusion that the people of this noble and selfless country will renounce its glory and its rights, and the spiritual wealth that is has gained with the development of education, science and culture.

As with every other foray into foreign affairs, Mr. Obama has managed to absolutely screw up this one. The Cuban people will not find their lives improved one iota as the geriatric Castros tighten their grip ever more. America will certainly gain nothing. While Fidel tongue lashes the weak and credulous Obama, Raul will drain his–American taxpayer’s–pockets as quickly as he possibly can.

Fascinating, is it not, that of the two Democrat candidates for President, both have been steeped in communism?  Bernie Sanders openly admits it, but one need not dig very deeply into Hillary Clinton’s background to find a youth and adulthood gushing with admiration for communism and its maximum dictators, and worshipping at the feet of its most virulent American and foreign practitioners.  The Castros will have friends in DC for many years to come.

The Obama years have been filled with tragedy, and as history is written, more will come to light. But among those pages filled with infamy, will be many chronicling Mr. Obama’s undying love for not only jihadist Islam, but aggressive and murderous communism.

God help us all; we elected him. Twice.