Regular readers will recall I’ve been following the Rick Perry case since August of 2014 when the news of his arrest broke. The first article eventually developed into a series of seven (eight with this article):

Rick Perry: The Possibility of Sanity and the Rule of Law

Perry’s arrest was the result of an entirely corrupt and vindictive Travis County—Austin—Prosecutor’s Office, an office which, over the years, has unsuccessfully prosecuted several prominent Republicans. Those persecutions essentially ended the political careers of those notable Republicans, which was, of course, the goal. 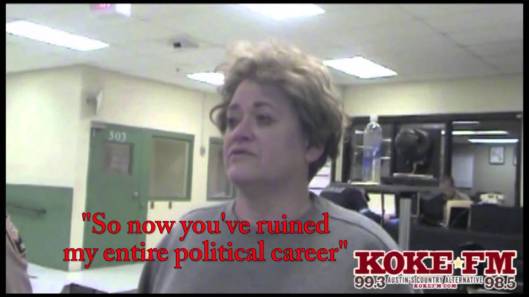 Perry’s troubles began with the drunk driving arrest—and eventual conviction–of Travis County Prosecutor Rosemary Lehmberg, a dedicated alcoholic whose blood alcohol level was three times the legal limit. Lehmberg not only did the “do you know who I am,” bit, she threatened to have the deputies booking her arrested, and became so violent and abusive, they had to restrain her. The video of that particularly ugly process, which provides a window into the daily lives of the police, is available here.

By state law, running the Texas Public Integrity Section was the duty of the Travis County Prosecutor. The state agency responsible for prosecuting violations of state political ethics laws was run by a raging and abusive drunk who threatened to arrest deputies doing their jobs in dealing with precisely the sort of person the Public Integrity Section was established to prosecute.

Governor Perry understood that Lehmberg was not the kind of person that should be the state’s top ethical watchdog, but he had a problem: Lehmberg was not a political appointee, but an elected Travis County official (Austin is a loony Progressive island in a sea of conservatism). He couldn’t fire her, but he could veto funding for the Public Integrity Section, and he threated to do just that if she did not resign. She refused—she is there still—and Perry did veto the funds. The Legislature chose not to override his veto.

Lehmberg appointed a supposedly non-partisan special prosecutor—he had been nominated, but not confirmed, for a judicial position by President Obama; readers can judge whether that indicates non-partisanship—who convened a grand jury, and the ham sandwich was indicted. Perry was charged with two counts, which amounted to threatening a veto—an entirely lawful act–and actually making a veto, which is also an entirely lawful act. One of the counts was soon thrown out, and the other followed about a year later.  The overall Progressive goal, however, was accomplished. Perry’s presidential hopes were dashed.

From The Austin American Statesman:

The state’s top criminal court on Wednesday threw out the remaining criminal charge against Rick Perry, sparing the former governor from trial and a potential prison sentence on a felony charge of misusing the power of his office.

The charge, related to Perry’s 2013 threat to veto money for Travis County prosecutors in an attempt to force District Attorney Rosemary Lehmberg from office, violated the Texas Constitution’s separation of powers provision by improperly limiting the governor’s veto authority, the Court of Criminal Appeals said in a 6-2 ruling.

A copy of the complete decision may be found here.

The governor’s power to exercise a veto may not be circumscribed by the Legislature, by the courts, or by district attorneys,’ Keller wrote. ‘When the only act that is being prosecuted is a veto, then the prosecution itself violates separation of powers.’

The court also spared Perry from a second felony charge of coercion of a public official, ruling that a lower court correctly tossed out the law last summer as unconstitutionally vague and a violation of free speech rights.

As I wrote in the earlier articles, both charges against Perry were entirely political constructions that could not be sustained.

Tony Buzbee, Perry’s lead lawyer, said he was pleased with the ruling.

It was a long time coming. This case should have never be brought, and I’m glad the court put its foot down and ended it,’ Buzbee said. ‘It is troubling when a nonelected ‘special prosecutor’ can obtain an indictment and then pursue it in front of the very judge that appointed him. I said all along this case was foolishness and would be dismissed.

As one might suspect, the special prosecutor was not similarly pleased:

Special prosecutor Michael McCrum, a San Antonio lawyer appointed to lead the Travis County grand jury investigation because of Lehmberg’s involvement in the veto controversy, said he was disheartened but not surprised by the ruling.

‘I was hoping our criminal justice system could withstand the power of politics. I’m afraid I’m wrong on this case,’ he said.

McCrum criticized the court for ruling that the abuse-of-power law was improperly applied to Perry without waiting for facts to be developed at trial, saying the majority ‘did back flips and jumped through hoops’ to void the charges at such an early stage.

‘I had witnesses and other evidence ready to roll if we were ever allowed to present this case to a jury,’ he said. ‘This court was never going to allow Rick Perry to face a jury of 12 people, to allow all the evidence to come out on his ulterior motives, his secret meetings, his secret conversations.’

McCrum said the law profession’s code of ethics precluded him from discussing specifics of the evidence he had hoped to present at trial.

‘This doesn’t say Rick Perry is innocent,’ said of Wednesday’s ruling. ‘It says he found a court that allowed him to walk free.

What utter nonsense. Not only is McCrum behaving unethically in insulting the state’s high court, he is demonstrating a singular lack of class. Suggesting that the court was playing politics by upholding the Constitution, and declining to allow the persecution of an innocent man, is a particularly despicable ploy, which obliteratess any claim to non-partisanship on McCrum’s part.

McCrum’s suggestion that he can drag anyone he pleases before a jury and convict them because he has “witnesses and other evidence” is likewise indicative of McCrum’s political motivation and bad will. In the American justice system, we don’t prosecute people using unconstitutional laws, nor does it matter how many witnesses and how much evidence an unethical prosecutor might drag into court. The court’s ruling not only confirms Perry’s innocence—all Americans are innocent until proved guilty—it confirms McCrum’s malign intent and willingness to pervert the law to criminally harm an innocent man who happened to be a political foe. Perry “walk[ed] free” because he was innocent of the charges, which were unconstitutional and defective on their face. Lehmberg and McCrum’s assault on the separation of powers is cynical and destructive.

McCrum’s hiding behind legal ethics, considering his angry and partisan sniping at the court and the law, is particularly disgusting.

But it wasn’t the drunk driving that bothered me — or, more to the point, that bothered Governor Perry. Upon her arrest, Lehmberg immediately went into ‘Do You Know Who I Am?’ mode and was so abusive that she had to be put in restraints. She demanded special treatment and threatened law-enforcement personnel with legal retaliation for refusing to let her slide. Specifically, she threatened to have them arrested. Amusingly, this is all captured on a hilarious video that never gets old.

This is the prosecutor in charge of the statewide task force policing political ethics. Think on that for a minute.

Governor Perry, being a reasonably responsible chief executive, judged this state of affairs to be intolerable. But Lehmberg is not a state employee subject to gubernatorial dismissal; she is an elected official of Travis County. Her office, however, is funded by the state government, and Governor Perry made it clear that he would veto that funding so long as the person in charge of the place was — let’s reiterate — an out-of-control criminal misusing her official prosecutorial powers in an attempt to suborn misconduct from law-enforcement personnel.

Governor Perry carried through on his promise, and Lehmberg retaliated by indicting him on felony charges, alleging that his use of the veto — an ordinary part of his prerogatives as governor — constituted an abuse of power. That Rosemary Lehmberg, of all people, was developing innovative theories about the abuse of official power is the source of some grim mirth. But politically motivated felony prosecution of governors and presidential candidates is no joke.

By all means, take the link and read the rest of Williamson’s article. His thesis is that Texas politics are inherently corrupt. That Rosemary Lehmberg is still in office, and that the Texas Legislature has not removed the Public Integrity function from the Travis County Prosecutor’s Office may reasonably be considered telling indications of that corruption.

We must remember that the process is the punishment. A bit more than a year and a half of Rick Perry’s life has been caught up in defending himself against a base political attack. The stress on his family and him may well shorten their lives. His legal bills–$500 per hour over 19 months—must be astronomical. Though he is a relatively young man, his political career is surely over.

Rick Perry is innocent. His motivations behind his veto don’t matter. Governors have an absolute veto power. He was presumed innocent before Rosemary Lehmberg retaliated against him, and he is presumed innocent today. However, the citizens of Texas, and elsewhere, are equally free to presume that Lehmberg and McCrum are mean-spirited partisans, corrupt, unethical and dangerous to the rule of law and to decent people.

At least puzzled bystanders will now know what those screams emanating from the offices of McCrum and Lehmberg were about.