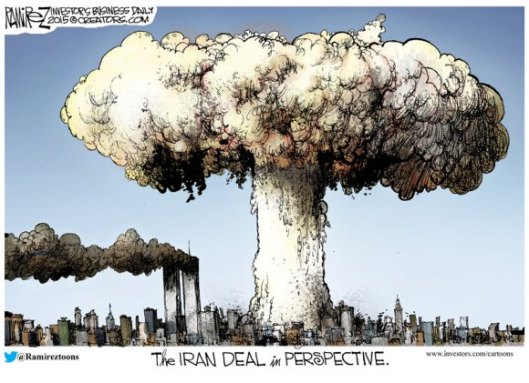 That is the title of this cartoon by Michael Ramirez. I hope it doesn’t come to this, and I really don’t think it will. But it might…

Fourteen years ago today Islamist terrorists brought Americans, quite unwillingly, into the modern age of terror. For the first time, many Americans had to confront the reality that America was no longer a fortress protected by vast oceans and unparalleled military might. Using weapons no more sophisticated than $2 dollar box cutters, barbarian, medieval killers hijacked three passenger aircraft– technological marvels utterly beyond them–and brought down the World Trade Center Towers, killing nearly three thousand.

At the same time, we fought back. Everyday Americans, crying “let’s roll!” wrested control of a plane back from darkness, and rather than passively allowing untold casualties in Congress or the White House, forced that plane down in a field in Pennsylvania at the cost of their lives. In so doing, they continued a tradition and reality of American sacrifice for liberty and against the forces of evil stretching back more than two centuries. May it always be so. 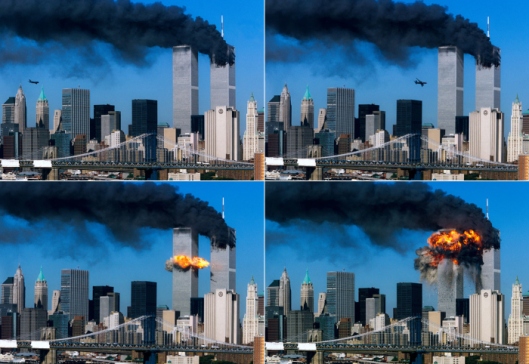 Many readers, for the first time, will be seeing—in this post–images the media have worked very hard to hide: men and women falling from the Twin Towers, choosing to leap to their deaths rather than burn alive. The media, prone to publishing the most demented and horrific images primarily when those images can be used to attack their political enemies, tried to keep Americans from being upset at Islamist monsters, who, to their way of thinking, represent the “Religion of Peace,” a misconception and lie shared by not a few supposedly conservative politicians and pundits. These few images are representations of only a fraction of the last moments of innocents brutally murdered by vicious vermin who didn’t know enough about engineering to understand their attacks would actually collapse the buildings.

For all of its failings—no president is perfect—the George W. Bush administration worked hard to keep America safe, and for the most part, succeeded. The same cannot be said of the Obama Administration. Arguably, the opposite can and must be said.

To be sure, brave American warriors sent by Mr. Obama “got” Osama Bin Laden, but many don’t know that Obama was so irresolute, so feckless, that he repeatedly canceled the raid, putting it off for months over political concerns, over worries that he might look bad if the raid failed. He learned nothing from that success, and America lost Kayla Mueller (go here and here), raped, tortured and murdered by Islamist brutes because Mr. Obama, having intelligence about her location, put off a raid until the Fourth of July, hoping for a symbolic boost to his popularity and image. By the time our special operations forces arrived and killed Mueller’s former captors wholesale, she had been moved, dooming her.

Under Mr. Obama our borders have been thrown open, and we have experienced a wave of so-called “known wolf” attacks, which have cost many lives, even the lives of our unarmed military personnel. Our enemies, now on the march around the world, know that under Barack Obama, America is weak and self-deceptive, unwilling to protect itself and unable to protect its allies. Our allies know that under Barack Obama, there is no more dangerous and treacherous ally than America.

The Middle East and significant portions of Africa are aflame and have only begun to experience the destruction that will be wrought before Mr. Obama leaves office. Should Hillary Clinton or another Democrat be elected in 2016, our most dangerous enemies—China, Russia, ISIS, North Korea, Iran, to name a few—will take advantage—they’ve already begun–of an unprecedented opportunity to run riot. Former allies of America will fall, the cause of liberty will be badly damaged, and untold thousands, perhaps millions, will die. Even if a Republican is elected president, they will inherit a military and intelligence apparatus so severely—and purposely—debilitated it will take many years to rebuild to a level capable of adequately protecting America, to say nothing of her traditional allies.

Mr. Obama is doing all he can to see that his deranged legacy is not overturned. He may be, to the horror of those that love liberty, western civilization and democracy, more successful than he imagined.

Consider this, which should be no surprise to those that have been paying the least attention:

More than 50 U.S. intelligence analysts have formally complained that their reports on terror groups, including ISIS and Al Qaeda, were inappropriately altered by senior officials to fit a narrative that the U.S. is doing better in the war on terror, according to The Daily Beast.

James Rosen reported on ‘The Kelly File’ that top advisors to President Obama have confirmed that the Pentagon is investigating allegations that damaging internal intelligence assessments of the sluggish fight against ISIS and other terror groups are being sanitized on their way up the chain to the commander-in-chief.

For many years, Mr. Obama has been forcing senior military leaders into retirement to make way for those willing to do his bidding.

All of this recalls allegations from the past decade about President Bush and Vice President Cheney allegedly manipulating WMD intelligence in the run-up to the Iraq War,’ Rosen said. ‘However, the blue-ribbon panel formed to investigate those allegations reported in its final report in 2005 that those claims were unfounded.’

Lt. Col. Tony Shaffer (Ret.) told Megyn Kelly there are three areas of intelligence being manipulated, according to his sources.

He said those areas are inaccurate battle damage assessments, overly positive conclusions and the deletion of suggested targets of attacks in the reports.

‘This is all a travesty,’ Shaffer stated.

If accurate, and I suspect this is only the tip of the iceberg, consider what this means. Barack Obama and his minions are purposely damaging our national security, and that of our allies, by allowing a civilizational, existential threat to thrive. And for what? So that Mr. Obama can polish his false credentials as a manly terror warrior. So he can maintain the fiction that a strong military is unnecessary. So he can waste limitless billions on his favored domestic boondoggles. Consider this from Charles Krauthammer:

Congress is finally having its say on the Iran deal. It will be an elaborate charade, however, because, having first gone to the U.N., President Obama has largely drained congressional action of relevance. At the Security Council, he pushed through a resolution ratifying the deal, thus officially committing the United States as a nation to its implementation — in advance of any congressional action.

The resolution abolishes the entire legal framework, built over a decade, underlying the international sanctions against Iran. A few months from now, they will be gone. [skip]

As of now, however, it is done. Iran will be both unleashed — sanctions lifted, economy booming, with no treaty provisions regarding its growing regional aggression and support for terrorists — and welcomed as a good international citizen possessing a peaceful nuclear program. An astonishing trick.

Iran’s legitimation will not have to wait a decade, after which, as the Iranian foreign minister boasts, the U.N. file on the Iranian nuclear program will be closed, all restrictions will be dropped and, as Obama himself has admitted, the breakout time to an Iranian bomb will become essentially zero. On the contrary. The legitimation happens now. Early next year, Iran will be officially recognized as a peaceful nuclear nation.

Mr. Obama’s lunatic deal makes only the most miniscule sense if the Iranians are willing to adhere to its timelines, which will only prevent Iran from going nuclear for a decade at most. Iran has already, repeatedly and publically, said it will not honor the deal, and fully intends to destroy Israel and America, yet Congressional lap dogs continue to support it.

This is a revolution in Iran’s international standing, yet its consequences have been largely overlooked. The deal goes beyond merely leaving Iran’s nuclear infrastructure intact. Because the deal legitimizes that nuclear program as peaceful (unless proven otherwise — don’t hold your breath), it is entitled to international assistance. Hence the astonishing provision buried in Annex III, Section 10 committing Western experts to offering the Iranian program our nuclear expertise.

Specifically ‘training courses and workshops.’ On what? Among other things, on how to protect against ‘sabotage.’

Imagine: We are now to protect Iran against, say, the very Stuxnet virus, developed by the NSA and Israel’s Unit 8200, that for years disrupted and delayed an Iranian bomb.

Krauthammer is correct: the deal obligates America to actually defend Iran against attack—primarily from Israel. Why would any American President do such a thing? Mr. Obama is doing it not to make America, Israel or our other allies safe—the deal makes that more than clear—he is doing it so that the deal—which he insanely considers a positive and historic foreign policy legacy—may not be rescinded.

This is not merely incompetence and fecklessness; this is treason. The treason does not extend only to Mr. Obama, but to John Kerry, who has been betraying America since the Vietnam Era. This deal is his crowning achievement of treachery:

Secretary of State John Kerry has darkly warned Israel to not even think about a military strike on the nuclear facilities of a regime whose leader said just Wednesday that Israel will be wiped out within 25 years. The Israelis are now being told additionally — Annex III, Section 10 — that if they attempt just a defensive, nonmilitary cyberattack (a Stuxnet II), the West will help Iran foil it.

Ask those 42 senators if they even know about this provision. And how they can sign on to such a deal without shame and revulsion.

No, Mr. Krauthammer; how can they sign on without committing treason and without urinating on the graves of every honorable American that died on 9-11 and in the fight thereafter against those that would gladly murder us all, those whose hands the traitorous fool Kerry gladly shakes as he makes Iran our ally against Israel and the survival of liberty.

John Hinderaker noted his hopefulness that Iran will not use nuclear weapons against its enemies, a hope cartoonist Ramirez and I do not share. The rational man must not rely on hope against an Islamist regime that calls America the “Great Satan,” and daily threatens to destroy America and Israel. Iran, and all of its Islamist fellow travelers cannot be deterred. Will people who behead, immolate, torture, rape and crucify their fellow man hesitate to use nuclear weapons? They will use whatever means they have to destroy their enemies: civilization, modernity, Christianity, and democracy. Us.

The true legacy of 9-11 must be the eradication, once and for all, of the evil of Islamist ideology and practice. Until then, liberty will have not a moment of rest nor Americans, a moment of safety. Until Barack Obama and his uniquely incompetent and destructive minions have moved on to fame and riches in the private sector, that process will not be truly begun. That’s how we honor those that died on 9-11, and in the battle for civilization since.

5 thoughts on “Fourteen Years Ago…”