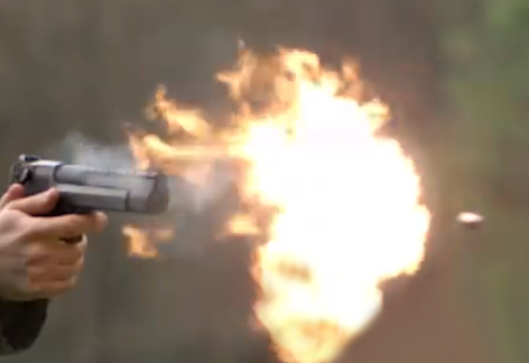 I’m something of a fan of Mythbusters. They often deal with firearm issues, and though they sometimes fail to understand and factor in all potential variables where guns are concerned, they do generally help to illuminate reality.

Bob Owens at Bearing Arms, who is often kind enough to publish my scribblings, has posted a video from Mythbusters that shows a .45 ACP round being fired. What’s the big deal about that? It’s filmed in extreme slow motion: 73,000 frames per second. It’s only a minute long.

As you watch the very brief video, remember that we’re dealing with contemporary “smokeless” powder, which is obviously smokeless only in comparison to earlier kinds of gunpowder. Notice also that the projectile travels entirely out of the frame long before the slide begins its backward travel.

Interesting and insightful indeed. If you’re not regularly visiting Bearing Arms, you’re missing a first rate firearm site, even if they do carry my scruffy ravings from time to time.