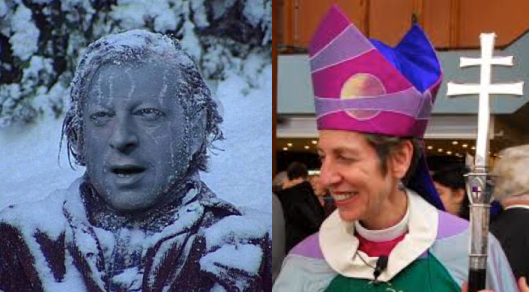 Well, it’s official: Al Gore is no longer the high priest of global warming. He’s been supplanted by a woman with higher credentials; at least higher in terms of faith. As it is faith upon which the global warming movement is based, this is particularly appropriate. The Guardian, which is very much a cheerleader for the movement/one true faith has the story:

The highest ranking woman in the Anglican communion has said climate denial is a ‘blind’ and immoral position which rejects God’s gift of knowledge.

Katharine Jefferts Schori, presiding bishop of the Episcopal church and one of the most powerful women in Christianity, said that climate change was a moral imperative akin to that of the civil rights movement. She said it was already a threat to the livelihoods and survival of people in the developing world.

‘It is in that sense much like the civil rights movement in this country where we are attending to the rights of all people and the rights of the earth to continue to be a flourishing place,’ Bishop Jefferts Schori said in an interview with the Guardian. ‘It is certainly a moral issue in terms of the impacts on the poorest and most vulnerable around the world already.’

In the same context, Jefferts Schori attached moral implications to climate denial, suggesting those who reject the underlying science of climate change were turning their backs on God’s gift of knowledge.

‘Episcopalians understand the life of the mind is a gift of God and to deny the best of current knowledge is not using the gifts God has given you,’ she said. ‘In that sense, yes, it could be understood as a moral issue.’

And how is the head of the Episcopal church intending to use her office and the moral authority of the church?

It’s hard work when you have a climate denier who will not see the reality of scientific truth,’ she said.

Ah! So now we see that the job of the church is to bring the light of scientific truth to climate deniers, and it’s hard work indeed. I assume this would make global warming hockey stick bully Michael Mann a saint? In other words, gentle readers, if you think climate change one of the great scams of human history, you sin. Thus does the Episcopal Church continue down the slippery slope of replacing Christian doctrine with progressive political orthodoxy.

Come to think of it, I didn’t know the Episcopal Church actually recognized sins anymore…