I don’t drink coffee. Never have. There’s nothing religious or philosophical about it, I just don’t like the taste, so for most of my life, I used Coca Cola to caffeinate myself, until I developed A-fib, and so much for caffeine, which, by the way, I don’t miss.

If I drank coffee, I am certain I would not pay $5.00 a cup and more for something I could make for far less at home. I am also absolutely certain I would not take kindly to being lectured by strangers trying to sell something to me about race, sex, family, religion, or just about any other topic. It’s just not their business. When salespeople ask for my phone number or zip code, I normally, politely, tell them that’s not their business and we amiably complete our business and I go on my merry way. If I’m not happy giving strangers my phone number, I’m hardly going to have a philosophical discussion with them about race.

Oh, but perhaps I should. After all, as Mark Levin put it:

Eric Holder said that we are a nation of cowards because we don’t talk about race. We never stop talking about race,’ Levin said two days after Holder announced his resignation and a day after an Oklahoma man who recently converted to Islam beheaded a co-worker. ‘He’s the coward because he won’t talk about Islam.

Perhaps Levin and I are just being overly sensitive, or perhaps we’re closet racists. We’d have to be closet racists, because all of the resources of the FBI applied to an investigation of my life wouldn’t turn up the slightest evidence of racism, and I suspect the same to be true about Levin. And after all, Eric Holder is the Attorney General of the United States, a man dedicated to equal justice for all, which is why this is a bit of a concern: 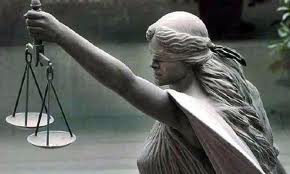 Continuing to face down questions as to why the U.S. Justice Department went easy on prosecuting members of the New Black Panther Party who stood armed with nightsticks outside a Philadelphia polling location during the 2008 presidential election, Attorney General Eric Holder expressed his personal frustration over the criticism that race played a role.

During a hearing of a House Appropriations subcommittee Tuesday, Rep. John Culberson, R-Texas, accused Holder’s DOJ of failing to cooperate with a Civil Rights Commission investigation into the decision to dismiss the case. Holder seemed to take personal offense when Culberson read comments from former Democratic activist Bartle Bull condemning the decision as the most serious act of voter intimidation he had witnessed during his career.

NOTE: Bartle Bull is a noted attorney who was actually present at a great many of the seminal events of the civil rights era.   He said that the actions of the Black Panthers were the worst case of voter intimidation he ever saw.

Think about that,’ Holder fired back. ‘When you compare what people endured in the South in the 60s to try to get the right to vote for African Americans, to compare what people subjected to that with what happened in Philadelphia, which was inappropriate….to describe it in those terms I think does a great disservice to people who put their lives on the line for my people,’ said Holder, an African American.

“My people.” One would think–even hope–that Americans are the “people” of the Attorney General or the President, but that has not turned out to be the case, particularly if they are critical of the AG or President, as they have often reminded us in suggesting that anyone that opposes their preferred policies must be racist. There can be no other legitimate reason. And so we arrive at Starbucks and its CEO, one Howard Schultz, who, since we are speaking of race, is as white as Wonderbread. 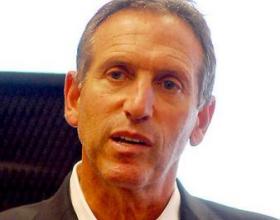 Schultz decided that Starbuck’s customers would like nothing more, while waiting in line for grotesquely overpriced coffee dispensed by one if its pretentiously named “baristas” (wouldn’t something like “Grand Dragoon With Buttons” be more fun?), than to be lectured about race by those “baristas,” the effect of this to somehow improve the race relations about which non-black Americans are such cowards. Schultz also suggested his baristas write “race together” and similarly stirring phrases on coffee cups, though one might imagine the overall effect would be thereby somewhat muted, though one could wrap their fingers over the words and obtain warm, if not exactly fuzzy, feelings.

Since the closest to a Starbucks I have ever been was riding along with my sister-in-law–disclaimer: she is also not a racist–as she obtained a coffee through a drive-up window, I turn, for practical experience, to Philip Terzian at The Weekly Standard:

So far as I can tell, and it is no particular surprise, the initiative has been a failure. During the five minutes that I was inside my neighborhood Starbucks, there was no evidence of #RaceTogether scrawled on cups, and I overheard no discussions about race in America – especially among the baristas, who seemed especially harried. This was a great relief, from my perspective: My inclination to shoot the breeze with Starbucks employees (admittedly never very strong) is usually thwarted by the knowledge that several people are standing behind me waiting, impatiently, in line.

Whatever would have possessed Mr. Schultz, who as far as I know is a decent, public-spirited sort–to come up with this particularly bone-headed stunt? Terzian provides perspective:

From last summer’s Chai Tea/youth education initiative with Oprah Winfrey, to his now-ubiquitous photographs and public declarations on ‘controversial’ topics, it seems evident that Howard Schultz regards himself as a public figure — and one of the least attractive varieties of the species: The celebrity CEO. As with H. Ross Perot, John Y. Brown Jr., Lee Iacocca, Donald Trump, and others, Mr. Schultz appears to have concluded that a bully pulpit ranks among the rewards of success in business. Or worse, that the American people deserve the kind of attention previously lavished on Chryslers, fried chicken, or Manhattan real estate.

In this instance, the wisdom of the public appears to have been affirmed: Mr. Schultz’s bumptious race initiative is being ignored. But what about Mr. Schultz’s baristas? For the many and varied reasons people choose to work at Starbucks, a managerial command to talk to customers about race seems highly unlikely. Suppose a hapless barista should say the wrong thing, or offend some sensitive coffee drinker? Race, and intimations of racism, are not the same as talking about sports or the weather: People lose their livelihood, and lives are blighted, by racial discourse.

What sort of boss would treat his employees this way?

Thanks Phillip, I’ll take it from here. What sort? A narcissistic progressive, very much like Mr. Obama or Mr. Holder. A conservative that built a successful company selling a product like coffee would understand certain principles:

1) Customers are there for two primary reasons: to buy coffee, and to a much lesser degree, to hang out and drink coffee and browse the Internet and be part of the ambience.

2) Customers do not see the employees serving them coffee, people they will see for only a few minutes at a time every now and then, as parent figures, ministers or counselors. In fact, most would be angered and insulted if such employees tried to behave in that way.

3) Customers are there to complete a brief business transaction. They get a product that pleases them at a price they’re willing to pay, delivered in a pleasant atmosphere by polite and efficient employees.

4) Upsetting this economic balance ticks people off, sends them elsewhere, and hurts the bottom line.

And what of Mr. Schultz? I’m only guessing here, gentle readers, but I suspect that he thinks himself superior to his customers, at least some of them. He thinks himself and perhaps even his “baristas” to have an elite, evolved social conscience, and such people have an obligation to do more than just sell heated, liquefied beans; they have an obligation to educate the less evolved. Perhaps Mr. Schultz even thinks his employees really want to do that, and no doubt, some do.

While Mr. Schultz likely understands #1, he goes badly wrong beginning at #2. He–and most of his baristas–probably don’t see themselves as the parents, ministers or counselors of their customers. But they almost certainly think themselves more moral and socially conscious. They actually think that by harrying people, whose only desire is a cup of coffee, about race, they’re making a better world.  Perhaps they only want to feel better about themselves.

Mr. Schultz apparently is not aware that there are competitors out there, people who also sell coffee, and who have no interest in implying that the coffee buying public are racists. Of perhaps he is aware of this, but thinks no right-thinking–actually, left-thinking–person could possibly be annoyed by such insinuations, and they surely would never go anywhere else for coffee. This is where Mr. Schultz trips over #4–and the bottom line–as well.

Americans are tired of race. They hired a president who promised to be a great racial healer. Most Americans didn’t think there was much of anything to heal, but what the hell? Hire the black guy–that was a nice symbol, twice–and like most politicians, he’d forget that rhetoric and get back to whatever he really wanted to do.

Unfortunately, it has turned out that a large part of what Mr. Obama and Mr. Holder and a great many others he hired have really wanted to do is punish Americans who have never so much as had a racist thought for racism more than a half century dead. Americans are afraid of talking about race? Cowards for not wanted to talk about it? Hogwash!

We’re tired of being hectored over racist incidents that weren’t. We’re tired of being called racists when we’re not. The race card has been played so often, so hysterically and so irrationally we’ve moved beyond ignoring it, thinking those playing it to be race-bating morons, to becoming genuinely enraged about it.

There will be no more backlash against black people than there has been an irrational backlash against Muslims, yet Obamites obsess over both. Americans are more than smart enough to know where the real problems lie and with whom. And there is one thing about which they are certain: whenever anyone is whining about needing a “conversation,” what they mean is “let me lecture you about how to think and behave you racist, sexist, fill-in-your-favorite-‘ist’-here, barbarian.”

But maybe this incident can serve as something that will truly bring together all races, races that find themselves waiting in the oppression of long lines at the counter and drive up of their local Starbucks. This may be the time that Americans can begin the long path back from the racist agitation of the Obama years. I may not get there with you, but someday, my little children can raise their voices. Maybe at long last, all races can raise their voices, and those millions of voices will become one voice that rolls over this land like a mighty river of coffee justice and that echoes in Starbuck’s corporate offices and in every Starbucks in the land:

Shut up, hurry up, and gimme my coffee!

And being given that coffee, they can walk–or drive–out of Starbucks, crying, a people united, in one mighty cry of liberation:

Can’t you just smell the coffee beans of social justice?

10 thoughts on “Starbucks: The Beans Of Idiocy”