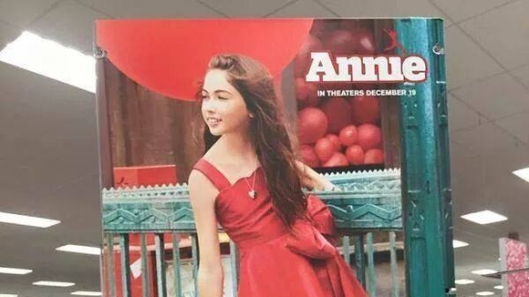 I’m afraid I’m just not hip anymore. When I use that word, my students look at me as though I’ve just arrived from Mars. The ability to pick up an electric bass or guitar and sight read jazz and big band charts with skill and style, and a bit of improvisation, used to be considered “hip,” but now, to be truly hip, one apparently has to be aware of the latest movie, or celebrity famous for being famous.

So it was with my characteristic lack of hipness that I stumbled across a story about the racist horror of Target–the retailer–having the temerity to promote its new clothing line for pre-teen girls, titled “Annie” by using a fresh-faced girl–surely a model–who happens to be white. Everything, as you know, gentle readers, is about race these days.

Just look at the Target ad that heads this article! See what I mean? Racist! And not only that, it disrespects–I believe the correct, contemporary term is “disses”– one Quvenzhané Wallis. The horror!

This is where my utter lack of hipness comes in. I can pronounce that name phonetically, but who knows how Ms. or Mr., or something-in-between might choose to pronounce it? After all, you can spell your name Mnskuuf67dyystw! and pronounce it “Smith” if you choose, explaining that they’re all silent. Anyway, back to M…Wallis. So I googled …Wallis and found to my mild surprise she is the 11 year-old star of a contemporary movie remake of “Annie,” which used the unimaginably clever idea of replacing all the white folk–like Annie who has always been a redhead–with black folk instead, though Jamie Foxx, who is apparent the Daddy Warbucks character, is still more or less bald. And I had no idea the movie existed, nor was I aware of Ms. Wallis! How unhip is that?  That’s her in the red coat, which really confuses me.  The last time I was hip, afros were in style.  When did they come back?  Or perhaps that too is an indication of my hipness deficit?

But let’s get back to the meat of the blazing controversy. One L’Sean Rinique Shelton, who I think might be female, but there’s really no telling, apparently from the whimsically named Bear, Deleware, had this to say in starting a petition on Change.Org to force Target to advertise their Annie line with exclusively black pre-teens because…uh, well, read it yourself:

Remove the TARGET Annie in-store ads if you cannot show better diversity in ALL of your stores!

In the current stench of racism and division amongst Americans, why would Target singlehandedly disrespect Quvenzhané Wallis and add more pain to injury as it relates to race relations?

Your recent Annie ads and in-store displays depicts a misleading depiction of the movie as it shows a Caucasion young lady opposed to the star of the film- Quvenzhané Wallis. Though the model is quite professional, she does not speak to the relevance of the movie or main character. The Red Dress is synonymous to Annie and we are not seeing that in any of your ads. When the original Annie came out, everything was about Aileen Quinn or a character/person that emulated her…why not now Target? If you can show it online, show it in ALL of your stores with multiple signage with different girls not one! Having these ads in some Targets is not great marketing- as a matter of fact it is not fair.

Wow! A stench of racism, division, disrespect, a misleading depiction, unfairness? I had no idea Target was so racist.  What does racism smell like anyway?

Although Annie is a fictitious character, there has been a major uproar from protesters stating that they would not support the movie due to the star being African American. Is the reason whyTarget maliciously hid Quvenzhané Wallis or refused to use an African American girl to depict Annie in their ads?

Uh, what major uproar? Help me out gentle readers. I mean, I know I hadn’t heard about the movie, but have you heard of any protest against “Annie”–actually were you even aware of the remake?–because the star happens to be black? Or is this just my lack of hipness and current, momentary celebrity awareness exposing itself again?

Why do you feel that we are not enough to portray our beautiful images on your advertisements? If it is a multi-cultural issue, surely you could use her co-stars on some ads and Quvenzhané Wallis or another African American girl on others. Target, do you realize that African-American’s Buying Power Projected to be $1.1 Trillion By 2015 and as per Black Enterprise our group is the second largest racial minority in the country. Enough signatures will diminish your bottomline as it relate to sales.

Why does African American actors have to beg for respect, especially as it relates to advertising? When does it stop?  Target it should stop now with this petition! Despite most beliefs, African Americans are capable of portraying more than drug dealers, pimps, and other bastardized portrayals of our culture. Gone are the days that African Americans sang or read lines from behind the scenes while our counterparts lip synced and was viewed as the stars. Quvenzhané Wallis earned that role and we demand your respect.

“Gone are the days that African Americans sang or read lines from behind the scenes while our counterparts lip synced and was viewed as the stars.” Uh…

We demand that you immediately pull those misleading adsyand distribute the diverse ads to all of your stores. Also and give Quvenzhané Wallis her due respect as well as other little girls who aspire to be like her by displaying an ad of an African American girl in the red dress and locket. Being African American is not ugly, it is not bad and we are sellable!  These grossly misleading ads are adding to the divide and does not give young African American girls aspiring to become actors anything to be optimistic about. Please show more diversity within your stores and depict a variety of races as you did with your online ads. Everyone does not have access to internet- plus the younger fans may not be allowed to use internet.

With Quvenzhané Wallis attending your Target launch, don’t you think that ALL Target stores should have the same signs to embrace all? In addition, that special ‘Red Dress’ is synonymous to Annie- not a random model that does not look like her!

It would also be proper for you to apologize to Quvenzhané Wallis- that was utterly disrespectful.

Concious Consumers that had enough

Golly! I guess I’m not hip enough to understand the whole red dress thing too.  Well OK then. Quvenzhane, I’m sorry for…uh, reading lines behind the scenes and lip syncing, and bastardized portrayals of our culture…and stuff…

Maybe we ought to see what Target has to say about this. The Hollywood Reporter, uh, reports:

According to Yahoo! Parenting, L’Sean Rinique Shelton was faced with some difficult questions after her 8-year-old biracial daughter saw an ad featuring a young white model wearing Annie’s signature red dress. ‘She saw the ad and said to me, ‘That’s not what Annie looks like. How come the new black Annie isn’t good enough? Does that mean I’m not good enough?’ Shelton told Yahoo! Parenting.

Although Shelton was able to quell her daughter’s uncertainties, she began to question Target’s seemingly singular portrayal of Annie and decided to write a petition Dec. 29 demanding a removal of the in-store ads and an apology to the film’s star, Quvenzhane Wallis. [skip]

In its [Target’s] online look book, which was published in October, there are girls of varying ethnicity modeling the Annie-inspired designs, but according to Shelton and fellow petitioners, the in-store ads didn’t feature any African-American models even though the star of the new film is African-American herself.

On Tuesday, Target issued the following response: ‘At Target, we appreciate the opportunity to hear from our guests. We’re proud of our Annie for Target collection, which was inspired by the recently released remake of the family classic and designed by the film’s costume designer…With regard to the marketing of the collection, girls from a variety of backgrounds were featured within the campaign, reflecting that anyone can embody the spirit and character of Annie.

As for the involvement of Quvenzhane Wallis, we had conversations with her team about being in the campaign, but ultimately it did not come to fruition. Fortunately, we had the pleasure of working with Ms. Wallis a number of times, including appearances at Target’s sales meeting in September and a launch event in New York City in November. We had a great experience working with Ms. Wallis and appreciate her efforts in promoting this collection.

Ah, so that’s it! Those racist capitalists at Target tried to get Quvenzhane Wallis to model for their ad campaign, but it didn’t quite work out, though she did come to a Target corporate sales meeting, and a campaign launch event in NYC, and they had “a great experience working with Ms. Wallis.”  Racists.

Or am I just hopelessly unhip?

PS: Here’s a review of Annie, just for fun. The reviewer didn’t exactly have their socks knocked off.  This is a movie I probably won’t be buying on DVD.  Racist.

4 thoughts on “Target and Me: Racist?”