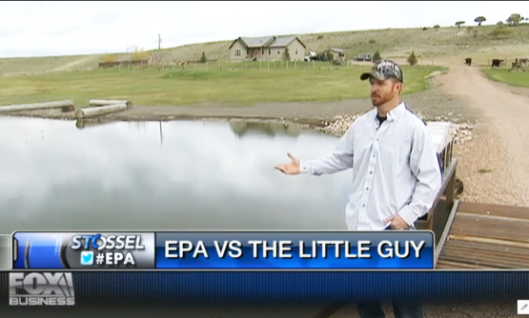 On August 24, 2014, I posted an article titled “EPA Cockroaches v. Wyoming Welder,” the story of Wyoming welder Andy Johnson who, owning a modest eight acre ranch, had a dream. Johnson and his wife Katie wanted to build a small stock pond (depicted above–notice his palatial mansion in the background) to stock with fish, water their horses, attract livestock, and serve as an educational resource for their three daughters.

Vicious environmental criminal and scofflaw that he is, Johnson met every requirement of Wyoming authorities for building the stock pond, and has the paperwork to prove it. But that, of course, did not satisfy the imperious bureaucrats at the Obama EPA, who are threatening him with more than $70,000.00 a day in fines if he does not obliterate the pond and do everything else the EPA prefers. This despite the fact that such stock ponds fall under a clear exception in the Clean Water Act. The EPA demands that citizens prove themselves innocent, tries to deny them access to the courts, and in general assumes the mantle of petty tyrant.

Wyoming’s Senators are on the case, but the EPA has not yet relented, and the battle continues. Politibrew reports:

John Stossel picked up on Andy’s EPA plight this weekend and recorded the following segment below with him, and aired it on his show. John Stossel’s show airs on both Fox News, and Fox Business. Love me some John Stossel.

Here’s hoping that Mr. Johnson is able, with help from outside groups and foundations, to defend himself, crush the “green” EPA monster, and prevail. I also hope Mark Levin’s foundation, Landmark Legal, continues to pound the EPA, as this federal agency is like a runaway train crashing through homes, farms, and various other businesses, including the coal and many other industries.

How much justice can you afford? Very little when going up against an insatiable, power hungry fed. The day the EPA is completely shutdown, will be a banner day in this country, and when it finally goes, I hope it takes the IRS and the Department of Education with it. Two other federal monsters that need slaying.

Take the link to the Politibrew report for a video of Johnson’s appearance on the Stossel program. Johnson seems very much like a honest, hard-working American who wants nothing more than to be left alone. Isn’t that one of our foremost rights–the right to be left unmolested by government?

Also take this link to hear a podcast of Mark Levin’s radio broadcast on the Johnson case.

Also take this link for a PDF copy of the EPA’s bizarre order in this case.  See for yourself the content of the thinking of dictatorial bureaucrats that think they own you.

Why should you care? The EPA under Barack Obama has decided that the Clean Water Act allows it to control every drop of water in America, even temporary bodies of water on private property produced by rain! The EPA has a blatantly green agenda and is as lawless as the president that inspires and supports it. It is not a stretch to suggest that after a significant rainfall, you could find EPA bureaucrats in your yard asserting authority over your property and demanding expensive changes while doing its best to deny you due process. Far more far reaching and punitive proposals wait in the wings after the November elections.

If the EPA gets away with this, it will be the most powerful agency in America, rivaling the IRS and able to skirt the law and the Constitution. It will be a law unto itself, and yet another illegal, dictatorial fiefdom serving the imperial state.

I’ll continue to report on this case as the situation warrants.