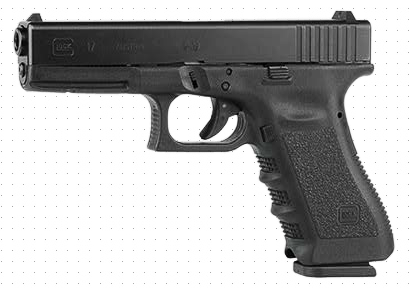 Circa 1984 Glock introduced its flagship handgun, the 9mm Glock 17, to the US market.  In a handful of years, the design took the civilian and police markets by storm and seized a substantial portion.  Glock’s revolutionary design, which included substantial use of advanced polymers (plastics), caused other manufacturers to explore the use of polymers in their firearms.  Like Apple with computers and consumer electronics, Glock did it first and best and everyone else rushed to catch up.  Those interested in more of the history of Glocks and various attempts to ban them may find my articles on the Glock 26 and the Glock 17 useful.

Generally, the use of polymers enables handguns to be made more inexpensively.  It also allows them to be lighter and more easily carried and concealed.  Without the need to have separate grip panels, the grips of handguns can be thinner and smaller, accommodating smaller hands while still allowing substantial magazine capacity.  Polymers are also more durable.  They do not show scratches, bluing does not quickly wear down to bare metal, they do not rust or otherwise corrode, and polymer frames actually absorb some of the recoil impulse that would otherwise be transmitted to the shooter.

But all was not peace and light in America.  Anti-gun politicians and activists saw an opportunity to frighten the public and enact bans on entire classes of firearms, and so, the plastic gun invisible to x-rays was born.  Terrorists would use these plastic guns to bypass airport x-ray machines and metal detectors and would hijack airliners.  Chaos would ensue, mass death and destruction, dogs and cats living together!

Fortunately, cooler heads prevailed, and Glocks were not banned.  This is so primarily because these is no such thing as a plastic gun that can escape detection, but here’s partially why: 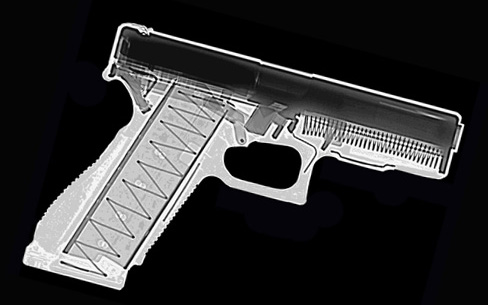 This is an x-ray image of an unloaded Glock 17.  The lighter toned parts are plastic, the darker, steel.  If the magazine was loaded, every cartridge would be clearly visible and identifiable as cartridges.  In fact, approximately 83% of the weight of any Glock is solid steel, including the entire slide, the barrel, all springs, the slide rails, various levers and bars, etc.  The largest plastic parts are the frame and the magazines.  Obviously, plastics are not invisible to x-rays, and a Glock–or any other polymer-framed handgun–looks precisely like what it is when x-rayed.

NOTE:  The plastic trigger and sights have obviously been removed from this handgun.  They would otherwise be as clearly visible as the other polymer parts.

Another factor arguing against a ban was the rapidly growing police interest in Glocks, in large part for their reliability and safety.  It would have been rather hard to justify banning Glocks for the general public but allowing them for the police.  Americans don’t take well to that kind of double standard.  In the end, Glocks became a dominant force in the world firearm market, but the antis had some success, including the Clinton gun ban which sunset after 10 years.  Even most Democrats didn’t want to try to resurrect a law that did nothing to prevent crime and much to destroy Democrat political careers.  However, a small provision was inserted into a much larger federal firearm law, 18 USC Section 922 (Part I, Chapter 44):

(p)(1) It shall be unlawful for any person to manufacture, import, sell, ship, deliver, possess, transfer, or receive any firearm –

(B) any major component of which, when subjected to inspection by the types of x-ray machines commonly used at airports, does not generate an image that accurately depicts the shape of the component. Barium sulfate or other compounds may be used in the fabrication of the component.

This might, upon first glance, seem reasonable, but it accomplishes exactly nothing, because there is no such thing as a firearm that violates any portion of this law.  The chamber pressures generated by firing any cartridge requires heavy, high quality steel barrels and slides in any handgun design.  Glocks and similar designs cannot violate the laws of physics.  Plastic is used only where possible and safe.  These firearms are absolutely detectable, in 1984 and 29 years later in 2013.  And once again, other materials, including plastics, are not invisible to x-rays.

But now, having struck out on Mr. Obama’s anti-gun agenda–for the moment–the antis have latched onto another red herring as a means to renew and expand the related provisions of 18 USC 922, which expire on 12-09-13.  That there has been no threat in any way affected by a law designed to ban non-existent guns is not a concern.  Any expansion of any law that might help to ban some kind of firearm–real or not–is a step in the right direction for these people.

When a decades-old law banning undetectable firearms expires less than a month from now, federal agents say a plastic weapon created on a 3-D printer could emerge as a national security threat.

The homemade plastic gun, known as the ‘Liberator .380 and made with a computer blueprint, a 3-D printer and plastic resin, could pass through security checkpoints without setting off metal detectors.

The gun uses only the smallest bits of metal for ammunition and a firing pin the size of a roofing nail. 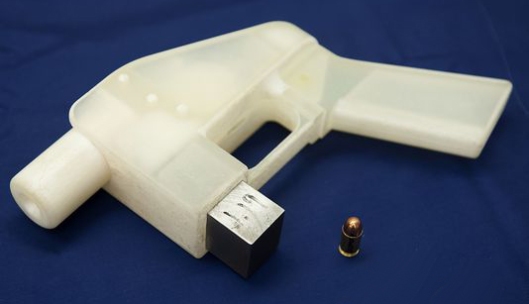 Notice that the “gun” is quite crude and is not a magazine-fed, useful weapon, but a laboriously loaded single shot.  This does not deter the usual anti-liberty suspects.

Sens. Bill Nelson, D-Fla., and Charles Schumer, D-N.Y., and Rep. Steve Israel, D-N.Y., have proposed an updated version of the bill that would ban the design, manufacture, sale, import, export and possession of the 3-D plastic guns. The measure requires a gun’s receiver, slide and barrel to be made from metal.

The issue is the rapid advancement in 3D printer technology.  Anti-freedom advocates suggest that the technology is so widespread and advanced that anyone can traipse down to the local computer store, purchase a 3D printer and gun making software, and produce a fully functional gun invisible to detection.  This is nonsense.  My November 28, 2012 article on this issue may provide some useful background information, but let’s examine the facts, circa November, 2013.

The “liberator” prototype is a crude device that with most available materials, will explode in the hand of anyone trying to fire it.  In addition, under x-rays, it looks like the crude simulation of a firearm it is.

3D printers remain expensive devices, as are the materials necessary to manufacture a firearm of any kind.  The technology is still in its infancy.  Such devices are more dangerous to the user than any intended victim.

There have reportedly been some limited tests where all-plastic guns made with special, reinforced polymers have actually fired a few cartridges without immediately and catastrophically self-destructing, however, this was done under laboratory conditions and does not represent functional, useful firearms.  I’ve little doubt such weapons, after firing a few bullets, would be ready to destruct with the next.  The laws of physics cannot be long denied.

Anti-freedom activists always invoke the children.  “Killers will use these plastic guns to get into schools!”  Why would anyone planning the mass murder of children go to the trouble of making a one-shot gun that will blow up in his face when only a tiny fraction of schools have metal detectors, even fewer have x-ray machines and conventional, effective firearms are widely available?  What makes any sentient being believe that someone planning mass murder would obey any law relating to firearms, plastic or otherwise?  That has certainly not been the case in any school attack in history.

The attacks on 9-11 were accomplished with box cutters, and there is no doubt–again, to rational men–that adopting the Israeli model, where the focus of prevention is on behavior and the human beings likely to perpetrate terrorist violence rather than on inanimate objects, would actually enhance safety rather than doing nothing more than harassing the innocent.  Unfortunately, our federal government is far more concerned with not hurting the feelings of favored victim groups and in infringing on the rights of the law-abiding than in protecting the lives of its citizens.  Anti-gun politicians are always far more interested in limiting liberty on the road to establishing a glorious socialist utopia than in saving lives–except of course, their own.

Even so, there is nothing inherently wrong with prohibiting genuine threats.  As always, the devil is in the details.  Anti-gun types commonly have so little knowledge of firearm terminology and science that they propose prohibiting non-existent, innocuous, or irrelevant parts or accessories.  Senators Nelson and Shumer and Rep. Israel propose banning any “receiver, slide and barrel, not made from metal.  Of course, some do know enough, and do their best to ban common, useful firearms whenever possible, Second Amendment be damned.

All barrels and slides must be made from metal, and who has any idea what Shumer’s definition of a “receiver” is?  There is no such term commonly associated with handguns (there is with long guns).  The closest part would be the frame, which in the Glock is the part that comprises the grip, magazine well and trigger guard, essentially the largest plastic component under the slide.  In non-polymer handguns, the frame is made entirely of metal.  It’s likely these never-resting gun-banners mean the frame and intend to ban Glocks and similar weapons.

NOTE:  Regular reader and savvy firearm guy DNS Guns notes that “receiver” is a legal term–as in gun legislation–associated with long guns and handguns.  This is quite true, however, the frames of handguns are generally not referred to as “receivers,” while the analogous parts of long guns routinely are.  This may well be why Mr. Shumer and his acolytes use the term, which would of course, encompass all handguns, including Glocks.

Mark Twain said that anyone that likes sausage and the law should never watch either being made.  So it goes for firearm law sausage-making.

Thomas Jefferson was right: “the price of liberty is eternal vigilance.”