Our long, national nightmare is finally over.  Or at least the primary chapters have been written and sent to the printer.  I have no doubt we’ll be hearing about George and Shellie Zimmerman for many years to come.  But for now, Shellie’s legal nightmare is nearly at an end and she has the opportunity to reclaim something of a life.  I wrote about the charge against Shellie, a charge virtually devoid of evidence, in Update 37.2. 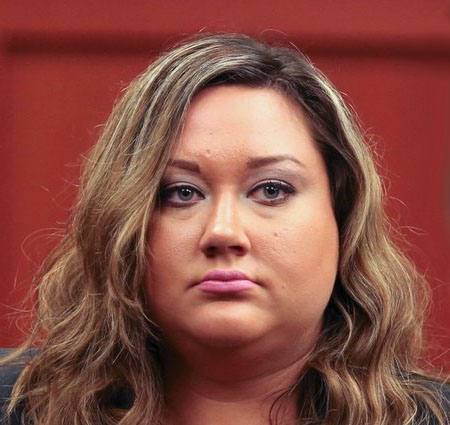 Last week, Shellie’s trial date of August 21 was postponed in lieu of a status conference.  The most common reason for such postponements this close to trial is an imminent plea agreement.  We now know that was indeed the case. The Orlando Sentinel reports:

Shellie Zimmerman, the wife of acquitted murder suspect George Zimmerman, admitted Wednesday that she had committed perjury to help her husband get out of jail and agreed to a plea deal that requires her to serve a year of probation.

Shellie Zimmerman had been charged with felony perjury, which carried a possible sentence of five years in prison. Instead, she negotiated a deal to plead guilty to a less serious crime — misdemeanor perjury.

She was composed during her 10-minute hearing, answering questions from Circuit Judge Marlene Alva in a clear, confident voice, saying, ‘Yes, ma’am,’ when asked if she understood what she was doing.

Part of the plea deal required Shellie to write a letter of apology to judge Lester, who was eventually removed from the George Zimmerman case due to his obvious and blatant bias against Zimmerman.  The Sentinel continues:

Shellie Zimmerman had no prior criminal record, and Assistant State Attorney John Guy of Jacksonville agreed to allow her to plead guilty to the lesser charge…

It was a negotiation designed to spare her a felony conviction and allow her to move on with her life.

When she was arrested, she was a nursing student nearly done with her schooling. Had she been found guilty of a felony, she would have been banned from applying to become a state-certified nurse for three years.

Professor Jacobson at Legal Insurrection has the text of the plea agreement at his post on this development.  In addition, the Conservative Treehouse has the text of Shellie’s apology letter as well as its take on the issues at hand.

Why would a prosecutor’s office, a group of prosecutors desperate for George Zimmerman’s blood and damned angry about being denied their pound of flesh, back off in the slightest way in their attempt to get a piece of at least some portion of the Zimmerman family?  Doesn’t the fact that Shellie admitted to perjury and wrote a fawning apology indicate that the prosecution was right?  Hardly.

Consider Shellie Zimmerman.  Despite George’s acquittal, he and Shellie are far from well off.  Unless her attorney, Kelly Simms, is taking her case pro bono–something I very much doubt–she continues to run up a defense bill at the rate of hundreds of dollars an hour.  A trial would add tens of thousands, perhaps hundreds of thousands, of dollars in legal fees.  Their future is, in many ways, out of their hands, and at the moment, neither of them has a chance of the kind of solid employment that would allow them to live a low profile life.  In fact, there are plenty of people who will likely never stop hounding them, such as this facebook site indicates: 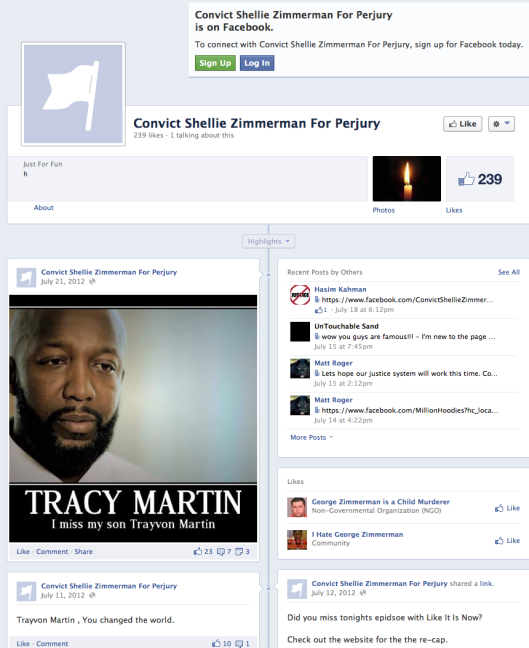 It’s highly unlikely that Trayvonites will ever allow the Zimmermans any peace.

George and Shellie’s arrests halted their educations, preventing George from pursuing his dream of becoming a police officer and preventing Shellie from finishing her nursing education and seeking certification to practice.  As the Orlando Sentinel article indicates, a felony conviction would not only postpone Shellie’s ability to apply for nursing certification for at least three years, it would, for all intents and purposes, make her virtually unemployable as a nurse anywhere.

This plea bargain solved all of those problems and more.  For a guilty plea to a misdemeanor, Shellie got her life back as well as the potential of a future.  No misdemeanor conviction would prevent Shellie from working as a nurse, and because adjudication is being deferred, after a year of probation Shellie will not have been convicted of even that.  Her record will be as clean as it was before George Zimmerman had the misfortune to save his life, thereby blundering into a racial, political perfect storm.  I have no doubt that Shellie believes she’ll have no trouble with probation, that it will be a mere formality.  I believe it too because there is no evidence at all to indicate that she is anything other than an honest person caught up in a Kafkaesque drama.

But if she is truly innocent, why not go to trial?  Simms said he believes she could win, and if the affidavit is any indication of the utter lack of evidence against her–just as the affidavit against George was–there is every reason to believe Simms is right.  The reasons are simple.

The state, in the form of the prosecutors, have unlimited resources.  They’re getting paid the same amount whether they take a week or a year to further the case against Shellie.  There are no financial pressures on them, and the media, particularly the national media, is mostly ignoring this case.  On the other hand, every hour spent on this case is costing the Zimmermans dearly.  And while Shellie very well might be acquitted, while the evidence against her is incredibly weak, even non-existent, any trial is a gamble and Shellie could be convicted, destroying her future.  Why not go for a sure thing, particularly when that sure thing, after a year of a probation that will surely be little more than a formality, includes no record of conviction for any crime?  The psychological relief of having a pack of rabid prosecutorial dogs off her back cannot be overstated.

And what’s in it for the prosecutors?  It is possible, however unlikely, that John Guy, assistant prosecutor for Angela Corey, has a conscience.  He may have realized that in prosecuting Shellie, he was stepping over the grounds of professionalism and human decency and wanted to do what was right.  But if that were so, why not simply dismiss the case?  Why not drop the charge, particularly since the plea-bargain he struck amounts to precisely the same thing: no record for Shellie Zimmerman.

Asians refer to it as “saving face.”  The prosecution was badly stung, publically humiliated in their loss to Mark O’Mara and Donald West.  They stacked the deck with unlawful and unprofessional conduct, hiding and slow rolling discovery and lying not only to the defense, but to the judge, who seemed unable and/or unwilling to recognize those lies or to do anything about them.  They had President Obama, the Department of Justice, the Florida Attorney General and the Governor on their side.  They had the black grievance industry in their corner.  And they had the full force of the local  and national media continually shaping public opinion on their side.  And above all, they had the judge in their pocket, a judge who ruled so often and blatantly for their untenable legal arguments that it became embarrassing.  All of that, and they still lost!

Consider too that they still face possible sanctions for their malfeasance, though it’s unlikely that Judge Nelson would do anything more than issue a Hillaryesque “what difference, at this point, does it make?” ruling.  We do not know what machinations may be going on behind the scenes with the Florida bar or legal community, but it is possible Judge Nelson’s rulings may be the least of the prosecutor’s worries.  If this is the case, or if they fear these possibilities, they may be anxious to abate the heat of this prosecution as quickly and quietly as possible.

They know exactly how weak and/or non-existent their case is.  They know as well as Mr. Simms that he could very well win the case, and while they would probably love to run up Shellie’s legal bills, their desire to make it go away was likely a stronger concern.  Losing this case too with an outright acquittal was surely a possibility they did not want to confront.  What would they do then?  Hold another interview with a slobbering media and talk about how they believed they had the evidence to convict?  Would Angela Corey call Shellie a perjurer just as she called George a murderer?

The plea bargain allows them to save face by claiming that they got a conviction.  Shellie Zimmerman admitted to committing a crime.  They even got an apology for Judge Lester, whose feelings were no doubt hurt by being removed from the Zimmerman trial for obvious and injudicious bias.  Poor judge!  And it was a particularly groveling apology too.  Yes, in a year that conviction will disappear as though it never existed–because it won’t–but they can still claim victory and hope that everybody forgets the whole mess, while quietly wincing and burning in anger when their pals at bar luncheons poke fun at them and commoners snigger at them in stores and on the street.  One can only imagine their rage at the scribblings of bloggers, that unruly rabble.

One should not underestimate prosecutorial concern over their win/loss records.  The goal of any prosecutor is supposed to be seeing that justice is done, but do not, gentle readers, forget for a moment that prosecutors keep score, and are damned serious about it.  In truth, professional, ethical prosecutors tend to have very favorable win/loss records because they don’t charge weak cases and take care to see that they don’t prosecute innocent people.  As I noted in Update 36.2, Bernie de la Rionda, in the humiliating aftermath of the loss in George’s trial, brought up his win/loss record, noting that the Zimmerman case was only his second loss of a murder trial.  Surely, this too was a concern.

And what about the groveling apology?  Why would Shelly agree to it if she were innocent?  She had no choice.  Accepting a plea bargain to a lesser charge requires admission of guilt.  It was that or go to trial with its inherent costs and risks.

I’ve no doubt Mr. Simms had a great deal to do with the text of the apology, and made sure it would be an appropriate prostration suitable to mollify the prosecution and an indignant Judge Lester.  He understands the system and knows the players, but why not?  It’s all going away in a year and everybody knows it, but for at least awhile the prosecutors and the judge have bragging rights and the media will be satisfied with this paltry, ephemeral scalp and turn its attention to other matters.  It was never much interested in Shellie anyway.  After all, there was no racial hook to stir up interest.

If the prosecution thought for a moment it had a reasonable chance of convicting Shellie Zimmerman, it would never–never–have negotiated a plea bargain, particularly not one so favorable to Shellie.  At the very least, it would have demanded at least a permanent misdemeanor conviction.  And while a complete and unconditional dismissal of the charges, or acquittal, would have been the preferred outcome for Shellie and Simms, the plea bargain amounts to the same thing.

And so another charge that should never have been brought, a political charge rather than any concern for justice, ultimately fails and justice prevails.  Of course, Shellie Zimmerman has lost more than a year of her life and suffered unimaginable stress and heartache, as well as untold financial costs to obtain this agreeable result.  Do not doubt the likely damage to her marriage this has caused.

Meanwhile, it remains entirely possible that the unethical, unprofessional, and inhumane prosecutors will suffer nothing more than the torment of their own consciences for their abuse of the justice system and two innocent people.  That is likely to be very slight torment indeed.