Welcome to this installment of a series intended to inform and inspire.  The two reasons presented this week, in many ways, speak for themselves.

Reason #8:  Mr. Obama—and his bureaucrats and followers—have established a Marxist cult of personality incompatible with and destructive to Democracy and American values.

Categories: contempt for the intelligence of Americans, hostility toward America, perverse narcissism, direct opposition to the foundations of Democracy, Marxist ideology over sanity.

Since before Mr. Obama was elected president, I have been warning about the cult of personality that surrounded him.  It has been fascinating to watch people react to ubiquitous imagery depicting Mr. Obama not only as a Marxist-style, dictatorial, maximum/dear/great leader, but as a messianic savior figure.

People that lived through the Cold War, particularly if they wanted America to win, instinctively recoil from such imagery.  Its stylized dictator worship speaks of totalitarianism, reeducation and death camps, slaughtered millions, and the oppression of body and spirit.  It exalts everything freedom, democracy and America have opposed with our most precious blood and treasure.  They recognize it as symbolic of the most depraved and evil ideologies ever conceived, and they understand that those ideologies labor even today to destroy liberty.

On the other hand, those who mourned the dissolution of the Soviet Union and who would “fundamentally transform” America, embrace Mr. Obama, and worship him as their statist messiah come to fulfill all their Marxist dreams.  Their numbers are, fortunately, few, but they never give up.

And there are the young for whom the Cold War and its reality are as distant as the War of 1812.  They know about as much about either conflict: next to nothing.  To them, the iconic Obama “Hope” poster is kind of cool, and because Mr. Obama is black and relatively young, they tend to see him—the President of the United States—as nothing of greater import than imagery fit for a t-shirt.

Another dimension of Obama-worship is the indiscriminate mixing of the sacred and secular.  Progressives tend to recoil from any sacred ideas or imagery in public discourse like vampires recoil from sunlight, yet gladly embrace images depicting Mr. Obama with a halo, or making him a god-like figure.  It’s impossible to know whether Oprah Winfrey knew that Progressives would take her designation of Obama as “the One,” to deranged, blasphemous depths, but that has certainly been the case.

One can reasonably argue that Mr. Obama did not paint the “hope” poster, nor did he take the photographs depicting him with halos or as a Christ-like figure.  However, one can blame him for doing nothing—nothing of which I am aware (by all means, let’s see his righteous, repeated and ringing denunciations of such anti-American claptrap)—to disavow such imagery.  It would not be unreasonable, considering his legendary arrogance and narcissism, to believe that he sees such base fawning as merely what is owed him, in the same way that he has often expressed surprise that people are upset at his mandates rather than thanking him for crushing their freedoms. 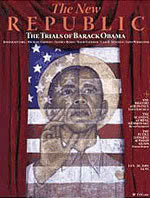 Could any image of a politician be more insulting and blasphemous to Christians? Why yes, following the next paragraph…

This bizarre phenomenon has no parallel in conservatism.  It began with George Washington who could have been acclaimed king, but consciously chose to set a different precedent for America, retiring to Mt. Vernon after two terms as president.  Though conservatives consider Ronald Reagan, for example, to be a great man and leader, they would not think of deifying him, nor would Mr. Reagan have allowed such insanity to go on in his name.  Conservatives surely would not compare Mr. Reagan—or any politician—to God, as in this particularly blasphemous image published in the New York Times around Easter, 2010.

Is it possible that the New York Times actually thought Christians would like this abomination, that it would cause them to think Mr. Obama their savior? Or were they simply doing their best to insult the majority of Americans?

And now comes news of the Democrat Party Headquarters in Lake County, Florida which, for several months, had been flying what was essentially an American flag, but with the stars replaced with Mr. Obama’s face, outside their building.

This particular incident reveals the emptiness of contemporary Progressivism.  With this kind of thinking, one has one-stop shopping for politics, religion, and personal philosophy, all wrapped up in one community-organizing package, a package in direct, intractable opposition to every freedom bought over more than two centuries with the blood of patriots.

Those with strong stomachs might wish to Goggle “obama halos.”  Yes, there are a few similar images of past presidents, almost all the artifacts of chance, images photographers produced without actually seeing them in their viewfinders as they pressed the shutters, only to be surprised when the proofs were later developed.  The sheer numbers and types of Obama halo images alone should serve to convince reasonable people that those who appreciate and think proper such things should be kept as far from the levers of power as possible, beginning at the next presidential election.

Reason #9:  Mr. Obama—and his bureaucrats—have established a new low in lying to the public.

Categories: contempt for the intelligence of Americans, Marxist ideology over sanity.

As I mentioned in the March 5th edition of this series, Mr. Obama’s energy-suppression secretary, Steven Chu, committed a classic DC gaffe: he accidently told the truth.  Appearing before the House Appropriations, Energy and Water Subcommittee, Mr. Chu responded to a question by Rep. Alan Nunnelee, who asked if his—the Obama Administration’s–overall goal was to lower the price of gas.  Mr. Chu said:

No, the overall goal is to decrease our dependency on oil, to build and strengthen our economy.  We think that if you consider all these energy policies, including energy efficiency, we think that we can go a long way to becoming less dependent on oil and [diversifying] our supply and we’ll help the American economy and the American consumers.

Within a week, Mr. Obama was fending off the fallout from that little bit of unfortunate truth.  At a March 6th news conference Mr. Obama responded to a Fox News question about his gas price intentions:

You think the president of the United States going into reelection wants gas prices to go up higher? Is that — is there anybody here who thinks that makes a lot of sense?

Actually, Mr. Obama, we do think that.  It’s what you and your bureaucrats have repeatedly and obstinately said.  But within a week. Mr. Chu had a very different view, as outlined by this exchange before Congress:

‘Are you saying that you no longer share the view that we need to figure out how to boost gasoline prices in America?’ Sen. Mike Lee, R-Utah, asked Chu.

‘I no longer share that view,” the energy secretary said.

‘But you did then, but you don’t now?’ pressed Lee.

Chu noted that he had made the comments before he was in government, just a couple of months before Obama won election and Chu was nominated to his current post.

‘When I became secretary of energy I represented the U.S. government and I think that right now in this economic — very slow return — that we need to have, these prices well could affect the comeback of our economy and we’re very worried about that,’ said Chu. ‘And so, of course, we don’t want the price of gasoline to go up. We want it to go down.’

Uh, Mr. Chu, you said just the opposite only about a week ago, and you were the Secretary of Energy then, weren’t you?

All politicians, gentle readers, lie.  We’ve come to expect a certain amount of it, but never before so many, so often, and so blatantly, shamelessly delivered.  Democrat Senator Bob Kerry (D-Neb) once called Bill Clinton “an unusually good liar.”  Mr. Obama and his sycophants have greatly surpassed Mr. Clinton in the race to the bottom, and they have even less shame about it than Mr. Clinton.  That’s an amazing accomplishment, one America can’t afford.

1 thought on “Saving The Republic; Why Obama Must Be Defeated: Reasons 8 and 9”